The new facility is the first of its kind in the UK and features a high-pressure connection, delivered by National Grid. This key piece of transport infrastructure is capable of refueling more than five hundred HGVs per day. The first major customer, Waitrose, part of the John Lewis Partnership, filled up at the new facility at unveiling, as a fleet of branded heavy-duty trucks rolled onto the forecourt. 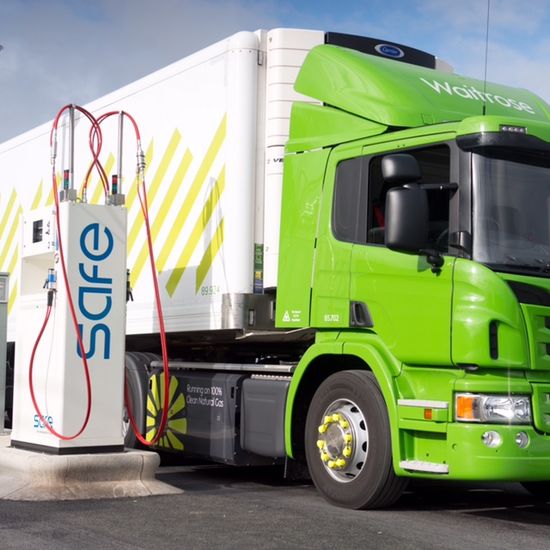 Waitrose has a regional distribution center less than one mile from the new CNG filling station and will be its anchor customer.

The Leyland CNG station will be accessible 24X7, 365 days a year. The unmanned facility, with CCTV monitoring and remote diagnostics, is equipped with:

The biomethane is made from waste at anaerobic digestion plants and delivered to the filling station through the National Grid pipeline system.

Using the Green Gas Certification Scheme (GGCS) each unit of green gas injected into the grid displaces a unit of conventional gas. So the GGCS tracks each unit of green gas from its injection into the distribution grid to its sale. It tracks the contractual rather than physical flows to ensure there is no double-counting from production to end use.

Even though the price of diesel and petrol has recently plummeted, the wholesale price of natural gas has also dropped, and our customers can still enjoy a pump price of CNG at our Leyland station that is more than 30% cheaper than the equivalent price of one litre of diesel. Using natural gas also cuts CO2 emissions by more than 20% and if fleets choose to fuel their trucks with Bio-CNG, they will be running on 100% renewable gas.

National Grid in the UK owns the high-voltage electricity transmission network in England and Wales, operating it across Great Britain, and also owns and operates the high-pressure gas transmission system in Britain.

The UK has around 10,000 km of 30 bar pipelines that is located close to around 90% of distribution depots, it provides a great low GHG opportunity, especially coupled with OEM produced dedicated CNG trucks like the Scania.

@Baldwincing
Biogas has ~65% methane and ~35% CO2. Does British biogas producers upgrade the CO2 part with hydrogen to make 100% methane or do they filter the CO2 away?

Generally you use Pressure Swing Absorption (PSA) to get the CH4.

In UK most plants have historically vented the CO2 but around 10 projects now make Liquid CO2 and sell to the food and drinks industry or use it to feed CO2 into greenhouses. Tomatoes love CO2