A crowdfunded London-based EV startup, Sparky Automotive, says it has developed a prototype for a riderless electric bike. Using the same electronic gyroscope technology as the Segway PT, the bike can negotiate traffic lights, road junctions and pedestrian crossings in much the same way as a driverless car—but it much cheaper and less dangerous in a collision than a full size vehicle.

Increasingly widespread availability of segregated cycle lanes also simplifies the use of the bike by separating it from other road traffic.

Control is provided by a combination of handlebar-mounted cameras uploading video through a wireless internet connections, and “virtual riders” operating the machines’ servos to vary speed and direction. 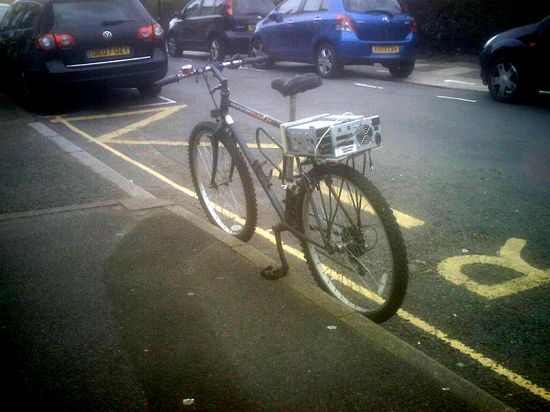 If you think about it, controlling an electric bike remotely is not really very different from controlling a drone. There is also the advantage that nobody is irritatingly overflown by a road bike so licensing is simplified too. After some thought we also realized that there are a surprising number of uses for a device like this. Simple examples being collection of shopping for the elderly and disabled, and rapid delivery of small packages without the expense of a driver.

Sparky was founded by a group of Brunel University Alumni. Their initial prototype was a traditional 3-door hatchback glider with an electric powertrain added. With a 32 kWh pack, it offered a driving range of around 160 miles (250km).

Leaving aside the issues of range and initial pricing, many motorists still do not realize the practical value of electrics including not needing petrol and being virtually maintenance free. Add to that the tax and subsidy benefits of zero emissions and you have a value proposition easily comparable with traditional automotive fueled cars.

As a cyclist, I am not sure I would welcome riderless e-bikes in the bike lanes (such as they are).
Also, what will happen when someone knocks one of them over ?
(Which will happen within the hour).
Will it be able to right itself ?

Also, crowdfunding an EV startup sounds like too little money, IMO you would probably need 10-100x what they are planning to raise, even if they have a clever idea (and we should assume that they do).

If it fell over it could call roadside assist.
This would be useful for learners or riders with other limitations.

Fully autonomous H2/FC drones with 2+ hours autonomy have been developed in UK and could quickly become superior local delivery vehicles?

The same drones with near future super flight SS H2 tank will soon have 3+ hours autonomy and could become useful defense/attack vehicles?