BMW is bringing its new 330e iPerformance plug-in hybrid (earlier post) to US dealers this summer starting at $44,695 including Destination and Handling. 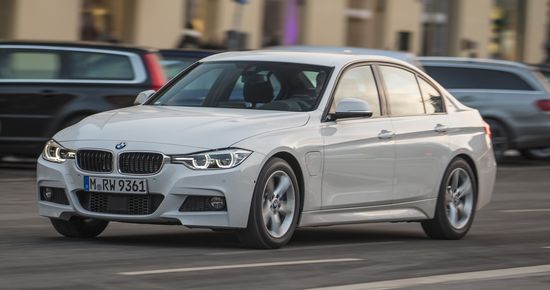 The combustion engine fitted in the BMW 330e iPerformance is based on the four-cylinder gasoline unit with BMW TwinPower Turbo technology that has already won the International Engine of the Year Award on two occasions. Characteristics include sporty power delivery, output of 180 hp (134 kW) and peak torque of 215 lb-ft (292 N·m).

The electric motor, developing 87 hp (65 kW) with maximum peak torque of 184 lb-ft (249 N·m), and the power electronics are derived directly from the BMW eDrive technology featured as standard in the BMW i3 and BMW i8 models.

The motor is powered by a lithium-ion battery with a capacity of 7.6 kWh (gross)/5.7 kWh (net). The model-specific concept of the high-voltage battery, including its battery management system and highly efficient direct cooling system derive from BMW i.

The battery can be recharged at any domestic power socket and is mounted flat in a particularly crash-safe position underneath the load compartment. The power electronics form a single integrated system that drives the electric motor via a liquid-cooled inverter, manages the energy flow from the high-voltage battery to the on-board electrical systems and provides centralized control of hybrid-specific functions.

The electric boost function is permanently enabled. The electric motor supplements the power from the combustion engine with 74 lb-ft (100 N·m) of torque and can deliver a brief extra boost—depending on the position of the accelerator—of up to 184 lb-ft (249 N·m).

The power generated by both the combustion engine and the electric motor is channelled to the BMW 330e iPerformance model’s rear wheels via an eight-speed Steptronic Sport Automatic transmission with shift paddles. The transmission ratios take effect for both drive systems, lowering the mechanical and thermal loads placed on the electric motor by sustained high revs.

This has a positive effect on the operating life of the electric drive system. It also means a torque converter is not required, which partially cancels out the extra weight of the additional drive unit. Just like conventionally powered BMW models, the advanced Steptronic transmission’s low friction losses allow for additional contribution to the high efficiency of the car’s drive system.

BMW iPerformance. BMW 330e iPerformance drivers can choose from three BMW eDrive-specific programs—AUTO eDRIVE, MAX eDRIVE and SAVE BATTERY—via the eDrive button in the center console. These settings allow the plug-in hybrid drive system to be adapted to the way the car is being used at any point in time.

BMW Efficiency and Dynamics. The Driving Dynamics Control switch on the center console allows the ECO PRO, COMFORT, SPORT and available SPORT+ modes to be activated. Just like steering and chassis functions and the shift characteristics of the eight-speed Steptronic transmission, these modes also make changes to the operating strategy of the hybrid drive system.

When the route guidance function is active, the navigation system collates the available information on the route ahead and uses it to manage the responses of the two drive units. The system accesses both the static data from the interactive map, such as speed restrictions and gradient information, and real-time information on the current traffic situation (Real Time Traffic Information – RTTI).

This proactive energy management uses the information as a basis to identify particular stretches of the route where the electric drive system will be preferred over the combustion engine. It ensures that the car drives through residential areas or—if the battery has sufficient charge—entire cross-town links on electric power alone and approaches the destination using only the electric drive system.

The system also prepares to use electric energy for uphill sections of road, so that the system’s full recuperation potential can be used on a subsequent downhill stretch. The Proactive Driving Assistant ensures the BMW 330e is equipped to offer locally emission-free driving, but also to cover long stretches extremely efficiently and with less impact on the environment.

BMW 360° ELECTRIC solutions and home charging. As a plug-in hybrid, the BMW 330e iPerformance can also be charged externally via the main power supply. The empty lithium-ion high-voltage battery can be fully replenished in just two hours and 30 minutes using a BMW i Wallbox Level II 240V charger (charging power: 3.5 kW, can be installed at home or the workplace).

Alternatively, the BMW 330e iPerformance can also be charged from empty in 6-7 hours from a conventional domestic power socket (Level I 120V charger) using the standard charging cable supplied.

The charging solutions available from BMW 360° ELECTRIC allow for easy charging while being on the road. The BMW i mobility service ChargeNow opens up access to the largest network of public charging stations worldwide (covering over 30,000 charging points managed by partners in 22 countries). BMW ConnectedDrive, the BMW ConnectedDrive app and the ChargeNow app make locating and using charging stations run by partners an extremely fast and easy process, while the ChargeNow card allows convenient and cash-free billing and payment.

The car is hooked up to the power supply via the charging socket, which is located in the front wing on the driver’s side, between the front wheel arch and the A-pillar. A flap with an integral sealing system protects it against ingress from moisture and dust.

The BMW 330e comes with its own standard charging cable—stored away in a special bag in the trunk and secured with a net—to connect it to the power supply. If no stationary charging options are available, the empty battery can be brought up to at least 50% of full charge while on the move by activating SAVE BATTERY using the eDrive button.

In order to maximize the car’s load capacity, the stainless-steel pressure tank was also positioned underneath the rear seat bench in semi-saddle tank form. It offers a usable capacity of 10.8 gallons (vs. 15.8). Fuel vapors in the BMW 330e iPerformance is trapped by an active carbon filter system, as is standard practice with vehicles powered by a combustion engine.

In conventional drive systems, the fuel collected by cleaning out the active carbon filter is channelled back into the engine’s combustion process once the filter has reached a pre-set degree of saturation. However, the filter can only be cleaned when the engine is running and, as the engine in the BMW 330e is not constantly in use, this cleaning process happens far less frequently.

BMW ConnectedDrive. BMW ConnectedDrive links the driver and the vehicle with the environment. The technology enables access to the most important vehicle information. The driver can call up data— such as the battery charge, available ChargeNow public charging stations and journey distances covered—on the display or pre-set a temperature for the passenger compartment.

The BMW 330e iPerformance comes as standard with auxiliary heating and cooling (output: 5 kW). These functions can be activated by a push of a button on the car key, via the BMW ConnectedDrive smartphone app or using a two-week timer on the iDrive operating system. Running the heating or cooling functions while the car is charging does not restrict its electric range.