Daimler Trucks demonstrated the new Highway Pilot Connect system for autonomous truck platooning on the A52 autobahn near Düsseldorf. Three WiFi-connected, autonomously driving trucks operated on the autobahn with authorization for public traffic in a platoon formation.

Such a combination can reduce fuel consumption by up to 7% and the road space requirement on motorways by almost half, while improving traffic safety at the same time, Daimler said. Based on the Daimler Trucks Highway Pilot system for autonomously driving heavy trucks (earlier post), the three trucks link up to form an aerodynamically optimized, fully automated platoon. 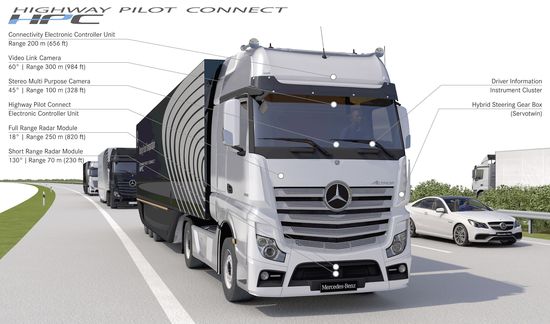 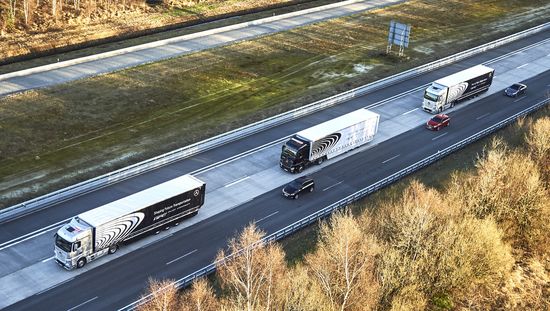 Connected vehicles in a platoon require a distance of only 15 meters instead of 50 meters between them. This considerably smaller distance produces a significant reduction in aerodynamic drag—comparable to slipstream riding in cycling competitions.

In this way a platoon of three trucks can achieve the ~7% fuel saving, resulting in fuel consumption figures of around 25 l/100 km (9.4 mpg) possible for a loaded semitrailer combination with a gross weight of 40 t. This corresponds to a consumption of only 0.66 l/100 km (356 mpg) per tonne, or CO2 emissions of 13.3 g per kilometer per tonne.

In parallel with this, platooning allows much more efficient use of the road space: thanks to the shorter distance between vehicles, a platoon of three linked trucks has a length of only 80 meters.

In contrast to this, three trucks which are not electronically docked require a total of 150 meters of road space.

At the same time platooning makes road traffic much safer: while a human behind the wheel has a reaction time of 1.4 seconds, Highway Pilot Connect transmits braking signals to the vehicles behind in less than 0.1 seconds. This considerably reduced reaction time can make a major contribution towards reducing rear-end collisions such as occur e.g. when encountering traffic jams on motorways.

The smart, self-optimizing truck has the highest priority for us. Using connected communication between the truck and other vehicles and the surroundings, we can improve traffic flow and lower fuel consumption and emissions. At the same time intelligent trucks help to lower the number of traffic accidents. This is an important step on our way towards accident-free driving.

The Highway Pilot was first presented in July 2014, in the Mercedes-Benz Future Truck 2025 study, followed by the very first public road authorization for an autonomously driving truck in May 2015, for the Freightliner Inspiration Truck (earlier post).

Compared to the Highway Pilot, Highway Pilot Connect has the additional technical function for electronic vehicle docking. Communication between vehicles is made possible by an onboard telematics platform. A specific V2V (vehicle-to-vehicle) communication module using a special WiFi standard reserved exclusively for automotive enables direct data transfer between the trucks. Highway Pilot Connect uses this for a constant exchange of information with other trucks and the environment.

Because of their technology, all the members of such a platoon continue to be autonomously driving trucks. They are able to maintain their direction independently of the vehicle ahead, and thanks to their combination of linear and lateral guidance, they can react to unexpected situations at any time. This also applies if other vehicles cut into or leave the platoon’s space. In this case the vehicle can smoothly disengage from the platoon and continue alone in autonomous mode. The driver does not need to intervene.

Docking three or more vehicles together becomes particularly interesting in countries with a corresponding infrastructure. In the USA or Australia, for example, trucks cover long distances without bridges and exit roads on highways crossing the entire continent.

Within the European Truck Platoon Challenge, six European truck manufacturers will bring platoons of semi-automated trucks to public roads, crossing borders from various European cities in order to reach their final destination of the Port of Rotterdam on 6 April. The overall objective of all OEMs and the Dutch government is to jointly accelerate the introduction of a harmonized, cross-border regulation to optimize efficient road transport in the EU.

This is not the future. We need far more radically innovative designs. A large “skateboard” battery electric with ability to drive autonomously anywhere with a standard container on top of it is what we need to revolutionize goods transportation. Get that ready by 2020 and we can do on-road goods transportation pollution free and nearly free of any road accidents as well. We can also save lots of money on liquid fuels and truck drives. It will take less than 10 years from the first such driverless battery electric truck is commercially available until all new trucks sold are such driverless trucks.

Driverless platoons already exist for more then a century. They are called trains.

Only 7%, I would have expected a lot more.
If you look at the gaps between the trucks in the image, you can see that they are quite large. If they halved them they could probably increase the efficiency (at the cost of braking distance).
I imagine they will reduce the gaps as they get more confident using the trucks. They could also put a "tail" on the last one to help it with drag.
@Henrik, batteries might not be the answer for truck electrification, you might need a catenary or some other continuous (or semi- continuous) charging system (such as has already been proposed).
Also, platooning can be used regardless of engine type, it is all about reducing road space and wind resistance.
If you could get the trucks to brake as one (at speed) you could get them very close indeed (which would work well until you brake and one truck is on ice and the other not).