Audi unveiled its redesigned R18 diesel hybrid Le Mans racer for the 2016 World Endurance Championship (WEC) season. Among the new features in the R18 are a more radical aerodynamics concept, including a new safety cell; a Li-ion battery replacing the flywheel energy storage system; and a revised V6 TDI diesel engine. As a result, Audi’s LMP1 sports car is more powerful and more efficient than its predecessor; the new R18 consumes less fuel than any of the generations before it.

The new hybrid TDI powertrain delivers power output of more than 1,000 hp (746 kW), along with 10% less consumption that its immediate predecessor. The current V6 TDI consumes 32.4% less fuel than the first generation did in 2011. The FIA WEC regulations have been providing automobile manufacturers with incentives to build increasingly efficient race cars since 2014. Starting in the 2016 season, this competition will intensify, as the upper limit for fuel consumption will considerably decrease by 10 megajoules per lap at Le Mans.

The result is a race car that manages energy even more effectively than before. This is an objective we’re pursuing for our road-going automobiles as well. This type of motorsport continues to set an example for automotive engineering. For Audi, production relevance has been a core topic of all racing programs for 35 years.

As a result of switching to the 6-megajoule class, the hybrid system, due to the regulations, now recovers 50% more energy. The car’s aerodynamics concept is fundamentally new. Nearly all vehicle systems have been refined or redesigned. The race car has become lighter, and allows for more favorable packaging of the component assemblies.

Hybrid drive. Hybrid pioneer Audi, the first manufacturer to have won the Le Mans 24 Hours with an energy recuperation system, used a flywheel energy storage system from 2012 to 2015. With the new R18, Audi is switching to a Li-ion battery for energy storage.

The flywheel accumulator definitely proved viable for the lower energy classes. But due to the fact that we now have to process even more energy than before, a technology change suggested itself.

The production-based cells of the new hybrid storage system are serially connected. The system is located within the high-strength safety structure in the monocoque and separately encapsulated once more. Electrical and electronic safety systems monitor various parameters—from individual cells through to the overall high-voltage system—and will intervene if necessary. The shutoff logic includes crash detection.

The energy stored by the system is generated by an MGU (Motor Generator Unit) at the front axle. The Audi R18 converts the rotary motion of the front wheels into electrical energy when the driver brakes before entering a turn and feeds it into the storage system. If the race driver accelerates again on exiting the turn, the current flows in the opposite direction to power the MGU. As a result, the front axle of the R18 helps accelerate the race car again. A low-temperature cooling circuit, which is separate from the engine cooling system, cools the battery cells, MGU, and power electronics.

From the 2016 season on, there will be a track-specific limitation imposed on power output in addition to the previous energy classes. Although the MGU may recuperate any desired amount of energy, it may now only supply 300 kW (408 hp) in the race at Le Mans.

Audi has designed its MGU for an output of more than 350 kW (476 hp) in order to recover as much energy as possible. Even when braking at high speed, the braking phases of an LMP1 race car last only three to five seconds. The high system output helps efficiently recover the required energy. Because of the 300 kW limit at Le Mans, the energy from the hybrid system will be available for a longer period of time. This limit does not apply to the other FIA WEC rounds.

By opting for the 6-megajoule class, Audi has presented its most powerful MGU so far. In 2012, Audi started with about 150 kW (204 hp) of electrical power output. To date, this level has far more than doubled.

Conceptually, the previous and the new MGU are akin to each other. However, the power electronics, stator, and rotor are new developments. This generation of the hybrid drive system delivers high output and develops strong torque, as a result of which the loads acting on the components that transmit power to the front axle increase accordingly. Audi uses a limited slip differential at the front axle to transfer torque with minimal loss.

V6 engine. While the developers of the hybrid drive system were allowed to increase output for the 2016 season, the engine development team headed by Ulrich Baretzky faced the opposite challenge. The 4-liter V6 power-plant receives clearly less fuel, which initially reduces its output.

Audi switched to a higher hybrid energy class—and the regulations allocate less fuel to race cars which recuperate large amounts of energy. This results in a reduction of about three percent. At the same time, the speed of the LMP1 race cars continually increases. To control it, the officials of the FIA, the WEC and the Le Mans organizer ACO allocate less fuel energy to the hybrid race cars to control the lap times.

The basic concept of the V6 TDI engine dates to 2011 and features a double-flow VTG mono turbocharger, 120-degree cylinder bank angle, and exhaust gas side within the V angle. The initial displacement volume of 3.7 liters increased to four liters in 2014.

We’re now using the basic engine concept for the sixth consecutive year. This shows how sound the basic idea still is. Due to efficiency increases, we partially compensate for the lower amount of fuel.

Among other things, the turbocharger is now lighter and more efficient. Externally, the V6 TDI has changed as well. Individual components are now arranged differently in order to make room for the new aerodynamics concept. The prescribed limitation of the charge pressure to a factor of 4 does not change the engine’s torque of more than 850 N·m (594 lb-ft). The fuel tank capacity of the race car has been reduced further as well—by 8% to 49.9 liters (13.18 gallons).

Transmission. The transmission is a new design as well. Audi’s simulations revealed that the optimized engine allows a very good gear ratio spread with minimal rpm jumps even in combination with a six-speed instead of the previous seven-speed unit. As a result, the engineers managed to further reduce the weight of the transmission.

New structure for optimized aerodynamics. The proportions of the R18 front end and the cabin within the overall vehicle length have changed and the conspicuous nose of the race car is clearly slimmer than before.

The new proportions influence weight distribution and aerodynamics. Our most important objective was to improve airflow.

At the front end, airflow has to be directed across the top of the race car and between the wheel wells, enter the cooling ducts through the body shell, and optimally approach the underfloor.

Vortices must be avoided, as this costs energy, said Zander. Undesirable vortices and turbulent flow would reduce the energy in the airflow and increase resistance. The smaller the space which the monocoque—the central stressed structure and safety cell of the race car—occupies in this area the larger are the clearances for low-loss airflow. 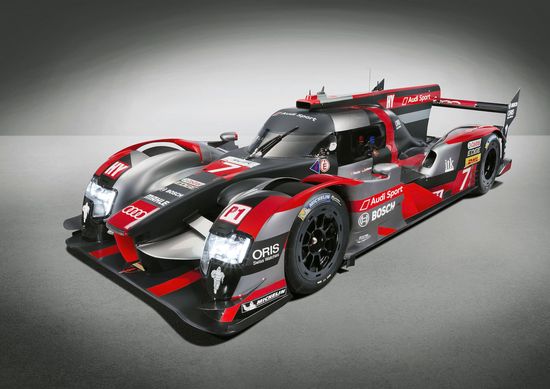 Due to the new proportions, the new Audi R18 directs airflow even more effectively to optimally approach the underfloor. At the rear, the air exits again through the diffusor. As a result, it produces a major portion of the downforce under the race car, which is beneficial in cornering. Audi developed a new monocoque, modified the proportions within the prescribed maximum length of 4,650 millimeters, and designed all the component assemblies accordingly.

New as well are the dimensions and positions of the prescribed openings in the front wheel arches. They are intended to reduce undesirable aerodynamic lift effects in the case of lateral airflow. Their areas have been enlarged by 45% compared with the 2015 season.

Chassis. This new concept requires innovations in many other areas. The suspension is an example. Due to the new monocoque, the mounting points for the front suspension have significantly changed. To make them more compatible with the position of the drive shaft for the hybrid system, the new mounting points have been rearranged.

Suspension kinematics has been significantly revised. Wishbones featuring a new design are now used for wheel guidance. The lift and roll spring-damper elements are actuated via pushrods at the front. The rear suspension kinematics has been optimized as well. As in the case of the previous-generation vehicle, the spring-damper elements are controlled using pullrods. Optimum balance of the race car in all speed ranges is guaranteed by balancers of the Linked Suspension System (LSS) in the chassis.

In addition, new solutions for the actuators of individual systems of the Audi R18 help reduce weight. While in the previous-generation vehicle electrical actuators were still operating in the braking, transmission and engine systems, the new Audi R18 uses an all-new development of a high-pressure central hydraulic system. The regulations prescribe a minimum weight of 875 kilograms for the LMP1 hybrid sports cars. In spite of a more powerful and therefore necessarily heavier hybrid system, Audi does not exceed this limit.

This is the hybrid I want one for my morning commute. Much more exciting than some dull Prius.