Aemetis is the first licensee of the LanzaTech technology in North America. The agreement provides for 12 years of exclusive rights in California based upon achieving certain milestones.

LanzaTech’s process involves biological conversion of carbon to products through gas fermentation. Using microbes that grow on gases (rather than sugars, as in traditional fermentation), carbon-rich waste gases and residues are transformed into useful liquid commodities, used in everyday applications, providing a novel approach to carbon capture and reuse.

The Lanzatech process can use industrial flue gases from steel mills and other processing plants as well as syngas generated from any biomass resource such as MSW, organic industrial waste and agricultural waste and reformed methane residues. 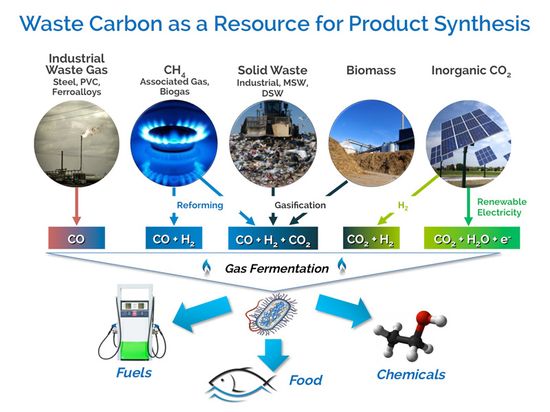 The first phase of the adoption of the LanzaTech technology by Aemetis will be an eight million gallon per year processing unit related to the Keyes plant, which under the agreement is planned to be built by the end of 2017.

The agreement provides for an expansion to 32 million gallon per year process unit, as well as licenses for units that would be installed at other existing ethanol plants. The current price of advanced ethanol in California including federal, state and tax credit incentives is approximately $4.60 per gallon, compared to corn ethanol at about $1.60 per gallon.

The 60 million gallon per year ethanol plant in California owned and operated by Aemetis currently uses approximately 20 million bushels per year of feedstock, consisting primarily of corn and milo supplied from the Midwest. By utilizing wastes from forest, dairy, orchard, vineyard, corn, rice, wheat and CDW sources that are local to our plant, we plan to reduce feedstock costs from more than $150 a ton to receiving tipping fees for waste feedstocks. This technology enables Aemetis to produce advanced ethanol that is valued up to approximately $3 per gallon more than traditional ethanol.

The Pathway Technology utilizes existing fermentation and distillation equipment to produce up to 2.5% cellulosic ethanol and a 7% increase in overall ethanol yield.

Aemetis plans to use Edeniq’s methods to submit a registration to the US Environmental Protection Agency for D3 RINs.