International shipyard group Damen recently delivered the first of a series of three hybrid tugboats (ASD TUGs 2810 Hybrid) to the Royal Netherlands Navy (RNLN). This 28.67-meter hybrid tug is named Noordzee and is the first standard hybrid tug supplied by Damen that the RNLN will employ. Compared with other tugs, hybrid versions use up to 30% less fuel and produce 40% fewer exhaust emissions.

Currently, the RNLN has four conventional tugs in Den Helder. However, these older vessels do not have sufficient power to tug new ships such as the HNLMS Karel Doorman (logistic support ship, 28,246 t full load); HNLMS Rotterdam (landing platform dock, 14,000 t full load); and the HNLMS Johan de Witt (landing platform dock, 16,800 t full load). Furthermore, the old vessels still make use of normal propellers with rudders with a restricted maneuverability and no longer fit the vision of sustainability that the RNLN has for the future. 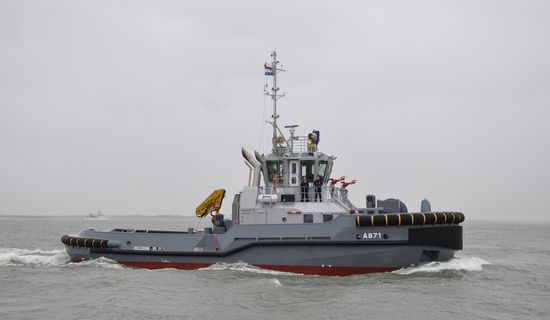 The new hybrid tug uses two rudder propeller units for optimum maneuverability and is able to sail on full electric power by means of a set of batteries and also diesel-electric on the generator set. Total power on tap is 3,680 brake kW, with a maximum speed of 13.4 knots.

Tugs equipped with hybrid propulsion can operate in port and coastal areas solely on battery power that has been generated by the combustion engine. Fully-electric sailing is possible for time periods of up to one hour at a speed of 4 knots.

When full pull is required, both main diesel engines are used, giving a maximum bollard pull of 60 tonnes, ensuring that all heavy duty tug jobs can be realized. 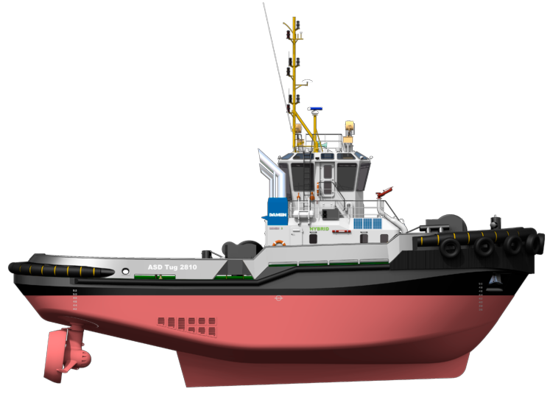 The RNLN was explicitly looking for a standard tug which was very environmentally friendly, as well as being powerful for heavy operations. In total, the RNLN, in cooperation with the Swedish Navy, has ordered five vessels, including the hybrid tugs. The two additional Swedish tugs are also of a standard design, but designed for operations in icy waters.

Rolls-Royce supplied Damen with a total of ten MTU Series 4000 engines and five MTU Series 2000 engines, in addition to azimuth thrusters for the propulsion system of the workboats. The MTU brand is part of Rolls-Royce Power Systems.

The two other hybrid tugs—the Waddenzee and the Zuiderzee—will be delivered in mid-March and mid-June. Damen delivered its first ASD TUGs 2810 Hybrid to Iskes Towage & Salvage in June 2014.

Yes! The tugboat, unlikely as it seems uses a lot of energy. All boats do I guess, but especially the work-horses of the sea. Hybrid boats make sense to me.