At the end of this month, six automated truck platoons—representing 6 different truck OEMs and their partners—will leave several European cities of origin and drive along public roads, targeting arrival at the APM Terminals, Maasvlakte II, Rotterdam on 6 April. This European Truck Platooning Challenge represents large-scale testing of cross-border automated truck-platooning; its aim is to bring platooning one step closer to implementation.

The truck platoons will all depart from their home base or production location.

The teams from the six brands will only platoon on motorways in normal traffic conditions. Local conditions will dictate whether or not they platoon for the whole route.

Over the past six months there has been intensive and multidisciplinary cooperation/teamwork to realize this new form of mobility. The network involved governmental, road and other authorities from the participating countries (Belgium, Denmark, Germany, Finland, the Netherlands and Sweden), truck manufacturers, umbrella organizations (ACEA, CEDR, CLEPA, EReg and IRU) plus a range of common interest groupings and consumer bodies.

DAF. A consortium of DAF Trucks, TNO, NXP and Ricardo is uniting under the name EcoTwin. Within the context of the EcoTwin project, it has already been demonstrated that the second vehicle is also capable of steering automatically. However, the emphasis during the Truck Platooning Challenge will be on autonomous acceleration and braking. In this regard, the planned distance between both combinations is 0.5 seconds, which at a speed of 80 km/h (50 mph) approximates to a distance of 10 metres (10.9 yards). 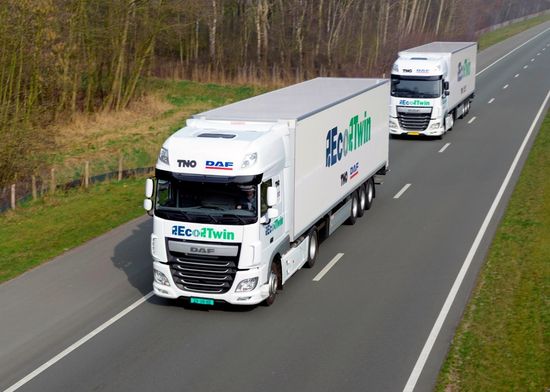 One novel aspect of the EcoTwin combination is the advanced Wifi-P connection, developed by NXP and specially designed for automotive applications. The rapid speed of the communication enables both DAF trucks to drive even closer together.

Furthermore, Wifi-P allows the drivers of the EcoTwin combinations to communicate with each other while driving. Everything that the driver in the first truck sees in front of him is projected onto a screen in the second truck (‘See Through’).

By reducing the gap between truck combinations as far as possible and making the most of slipstreaming, fuel savings of up to 10% can be achieved in future, along with equivalent reductions in CO2 emissions. Furthermore, Truck Platooning will further enhance traffic safety, thanks to the combination of Wifi, radar and camera systems. Another benefit is the further improvement to the flow of traffic, because platooning trucks will not overtake each other. Moreover, technologies are being developed that will enable passenger vehicles to join the traffic or leave the motorway safely and responsibly.

Daimler. Daimler is participating in the challenge with Mercedes-Benz Actros Highway Pilot Connect trucks. (Earlier post.) Daimler first presented Highway Pilot in July 2014, in the Mercedes-Benz Future Truck 2025 study, followed by the first public road authorization for an autonomously driving truck in May 2015, for the Freightliner Inspiration Truck. 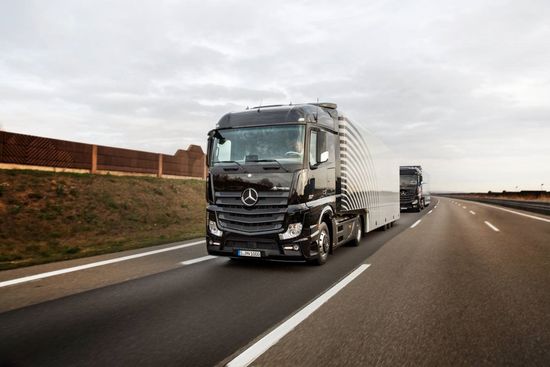 Compared to the Highway Pilot, Highway Pilot Connect has the additional technical function for electronic vehicle docking. Communication between vehicles is made possible by an onboard telematics platform. A specific V2V (vehicle-to-vehicle) communication module using a special WiFi standard reserved exclusively for automotive enables direct data transfer between the trucks. Highway Pilot Connect uses this for a constant exchange of information with other trucks and the environment.

Because of their technology, all the members of such a platoon continue to be autonomously driving trucks. They are able to maintain their direction independently of the vehicle ahead, and thanks to their combination of linear and lateral guidance, they can react to unexpected situations at any time. This also applies if other vehicles cut into or leave the platoon’s space. In this case the vehicle can smoothly disengage from the platoon and continue alone in autonomous mode. The driver does not need to intervene.

MAN. The platoon only forms on the motorway following confirmation from both drivers. The longitudinal control of the vehicle behind is activated and slowly reduces the distance to the vehicle in front down to the platooning distance. 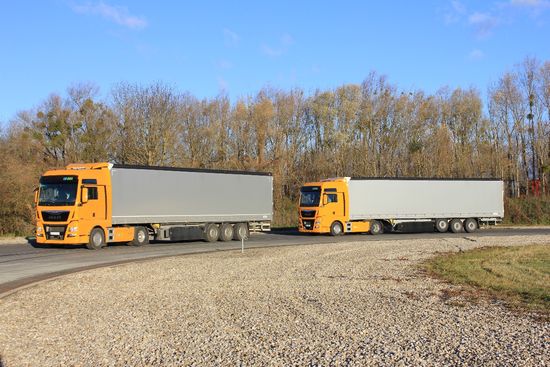 The two trucks are now synchronized and travel at a defined distance, with continuous monitoring of sensor readings and the functioning of the vehicle communication. The platoon journey can be ended at any time by either driver via an un-coupling signal or by taking control of the driving. If possible, in the interests of fuel efficiency, the distance is adjusted to the legally prescribed distance without interventions in the brake system.

Platoon journeys with a reduced minimum gap of less than one second apart require secure vehicle-to-vehicle communication. Key driving functions such as accelerating and braking torques are transferred instantaneously from the vehicle in front to the vehicle behind. When supported by further sensors, this enables synchronous slipstreaming for both vehicles with a positive impact on fuel efficiency.

Scania. Scania will send off three extra-long trucks on 29 March. For the leg between Södertälje and Malmö in Sweden, the Scania truck and trailer combinations will be driven with an extra trailer, taking their total individual lengths to 32 meters. 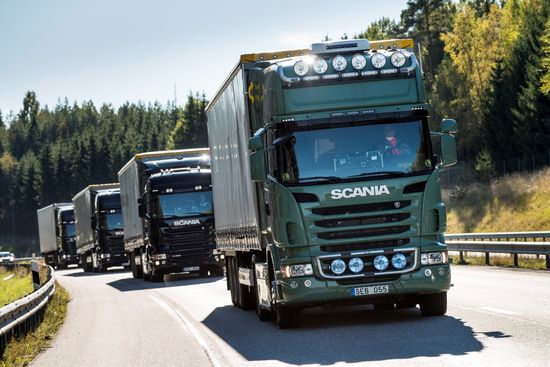 Volvo. The Volvo Group will participate by driving three trucks in a platoon from Gothenburg to Rotterdam in the Netherlands via Denmark, Germany and Belgium. Volvo, in cooperation with the Swedish Transport Administration and the City of Gothenburg, will arrange a seminar in Gothenburg in conjunction with the start of the journey to address the potential to enhance the efficiency of transportation through platooning and autonomous driving. A similar seminar will be arranged by Volvo Trucks in Brussels. 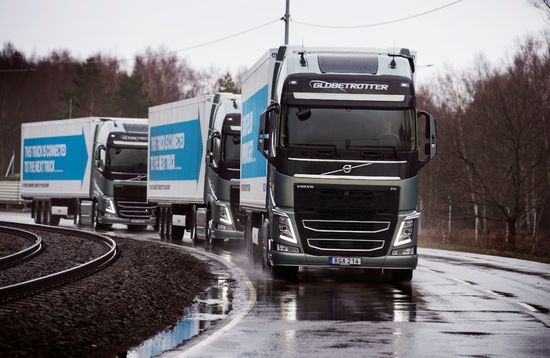 We believe that platooning offers major advantages, mainly for our customers, but also for society in the form of fuel savings, reduced emissions and enhanced transportation efficiency. Together with the rest of society, the transportation industry needs to tackle such challenges as the harmonization of legislation, and in so doing promote the introduction of platooning in Europe.

EU Truck Platooning Challenge is an initiative of the Ministry of Infrastructure and the Environment within the framework of the EU presidency.