The National Renewable Energy Laboratory (NREL) updated its annual survey of US non-starch ethanol and renewable hydrocarbon biofuels producers. The 2015 Survey of Non-Starch Ethanol and Renewable Hydrocarbon Biofuels Producers provides an inventory of the domestic advanced biofuels production industry as of the end of calendar year 2015, documenting important changes (e.g., biorefinery development, production capacity, feedstock use, and technology pathways) that have occurred since the publication of the original 2013 survey.

The report follows a staged development process and groups facilities into pilot-, demonstration- and commercial-scale facilities.

Renewable hydrocarbons. Only 167 million gallons per year of capacity for renewable hydrocarbons were operational at the end of 2015. One plant, KiOR, was producing in 2013, but was idled in 2014. Another plant, Renewable Energy Group, Inc. (formerly idled Dynamic Fuels) was in the process of start-up in early 2015 before idling due to a fire. 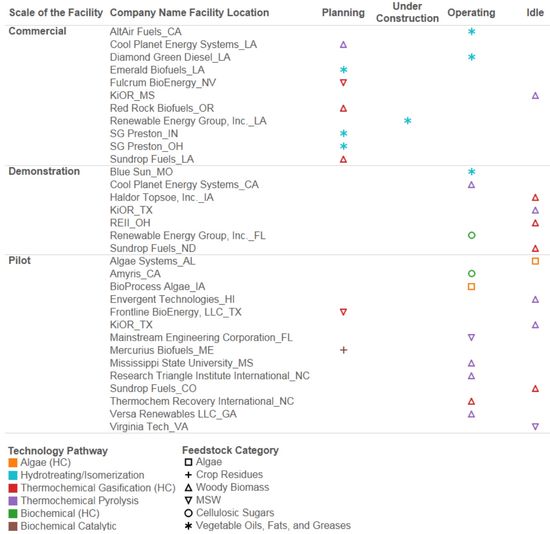