The average fuel economy (window-sticker value) of new vehicles sold in the US in March 2016 was 25.3 mpg (9.29 l/100km)—unchanged from the revised value for February 2016, according to the latest monthly report from Dr. Michael Sivak and Brandon Schoettle at the University of Michigan Transportation Research Institute (UMTRI). Fuel economy is down 0.5 mpg from the peak reached in August 2014, but still up 5.2 mpg since October 2007. 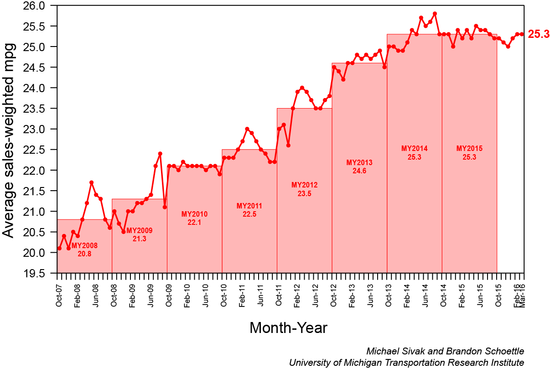 The University of Michigan Eco-Driving Index (EDI)—an index that estimates the average monthly emissions of greenhouse gases generated by an individual US driver—was 0.84 in January 2016, up 0.01 from the revised value for December 2015 (the lower the value the better). This value indicates that the average new-vehicle driver produced 16% lower emissions in January 2016 than in October 2007, but 6% higher emissions than the record low reached in August 2014. 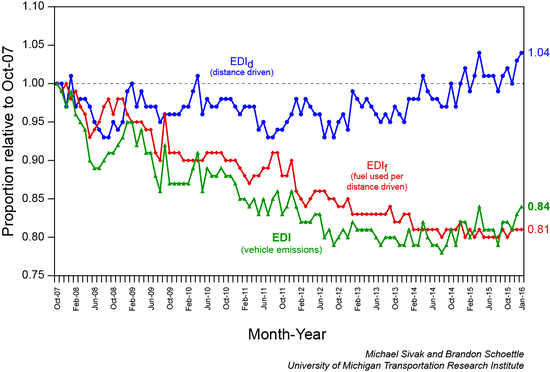 Window sticker value (mpg) is steady but has been negative or nil for the last 12+ months.

Real consumption is probably 10% to 20% higher.

Distances travelled are going up = fuel consumption going up?

Will more efficient HEVs, PHEVs, BEVs and FCEVs make a real difference by 2020 or so?