Since 2013, the share of premium gasoline in total motor gasoline sales in the US has steadily increased to 11.3% in August and September 2015—the highest share in more than a decade, according to data from the US Energy Information Administration (EIA).

This trend of increasing demand for higher octane gasoline is likely driven by changes in fuel requirements for light-duty vehicles (LDV) in response to increasing fuel economy standards, which will have widespread implications for future gasoline markets, according to EIA analysts.

Automakers are using a number of approaches and technologies to address the requirements of the Corporate Average Fuel Economy (CAFE) regulations, including, but not limited to: weight reduction; conventional engine and transmission efficiency improvements; better aerodynamics; and further development and sale of hybrids and electric vehicles. One significant trend is engine downsizing coupled with turbocharging.

Smaller, turbocharged engines can be used to raise fuel economy while meeting or exceeding the power and torque of larger engines, allowing engine downsizing and improved fuel economy with little or no performance compromise. Turbochargers work by using a turbine driven off the exhaust gas to pressurize the intake air. The pressurized intake air allows a turbocharged engine to produce more power compared with a naturally aspirated engine of the same size.

Because turbocharging forces more air into the combustion cylinder, it increases cylinder pressure and compression. However, increased compression can lead to an increased risk for engine knock (the premature combustion of fuel), which can damage the engine. Therefore, turbocharged engines typically require more design and operational features to prevent engine knock than naturally aspirated engines.

The octane rating of gasoline is an indicator of its resistance to spontaneous combustion. The higher the octane rating, the greater the resistance to preignition, the fundamental cause of engine knock. Use of higher-octane gasoline can offset the increased risk of engine knock caused by increasing engine compression. This higher octane is the reason why premium fuel has historically been required in performance and luxury vehicles that maximize power and torque.

In model year (MY) 2009, turbocharged vehicles accounted for 3.3% of new gasoline-fueled LDV sales. By MY 2014, their share was more than five times greater—17.6% of the market.

As automakers produce more vehicles with turbocharged engines, it is likely they will recommend or require more LDVs to use higher-octane gasoline. 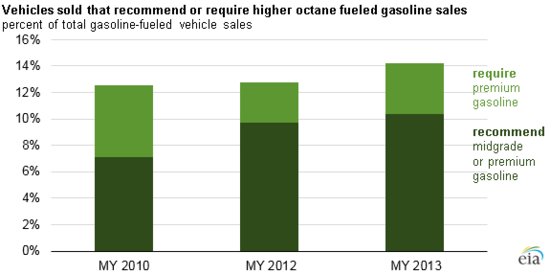 I bet the consumption of premium is back down not that prices have climbed. Whole sale price has been fairly level but stations charge what they can get away with.

This is silly to pay more for gas to reduce consumption. I have an 2005 simple dodge neon and the more i look at newer car the more i appreciate my simple low cost car, it has yet to be beat by the costly junk of new cars.

I said many time to start selling low cost synthetic gasoline 88 octans so no need to change my car for a costly new car because mine still behave like a new. The solution is instead to produce lower cost regular gasoline so in the ends i have just to buy cheaper gasoline and avoid been rip-off by the crop of 'new' car sellers that sell junk at high price. Many drivers paniked and bought costly hybrids and battery cars. Now they are triying their luck with the worst tecnology there is , hydrogen fuelcells. These crooked politicians are on the side of pure inflation and inneficiency and are mandating and subsidizing these crap products.

Hurry for exxon that exist since 130 years.

Nothing here about inherently high-octane fuels like NG or LPG, nor options for "octane on demand" such as alcohol injection over a lower-octane base fuel during periods of boost.