Zero-emission car sharing service BeeZero, run by a newly founded subsidiary of The Linde Group, will feature 50 Hyundai ix35 Fuel Cell electric vehicles for public use. BeeZero, which will launch in Munich this summer, will be the first car sharing service using hydrogen fuel cell cars.

The BeeZero car sharing service will be run on a zone-based model. The fleet of fifty ix35 Fuel Cell cars will be available in Munich’s city centre and also in the areas of Schwabing, Haidhausen, Au and Glockenbachviertel. As with conventional car sharing services, the cars can be easily booked online or via a smartphone app. 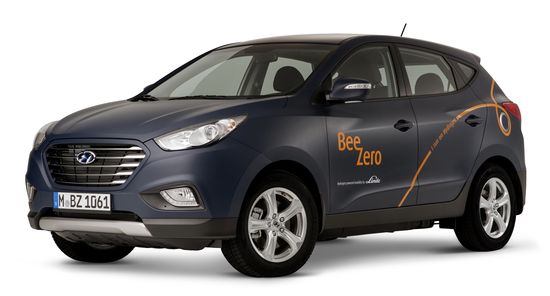 We expect to gain valuable information from day-to-day fleet operations which we will use to further develop our hydrogen technologies and to help expand the hydrogen infrastructure. BeeZero synergizes two mobility trends that are gaining a lot of ground at the moment—car sharing and zero emissions—and will bring the benefits of fuel cell technology to a wider group of potential users.

—Dr. Christian Bruch, member of the Executive Board of Linde AG

The Hyundai ix35 Fuel Cell can travel about 600 kilometers (373 miles) on a single tank, making it suited for longer journeys too, to the Bavarian lakes or the mountains for example, and not just for short trips in the city. Hydrogen fuel for BeeZero is sourced from sustainable production processes, making it completely carbon neutral.

In December 2015, Hyundai delivered five ix35 Fuel Cell vehicles to the Paris-based electric taxi start-up STEP (Société du Taxi Electrique Parisien). The fleet is planned to increase up to several hundred vehicles within five years, with the refueling infrastructure to be gradually installed in 2016, to meet the increasing demand for hydrogen.

The ix35 Fuel Cell has several modes of operation:

Currently there are more than 250 Hyundai ix35 Fuel Cell SUVs on European roads in 13 countries—more than all FCEVs from every other manufacturer combined.

It is also one of the best way to test FCEVs in 24/7 operation and H2 station facilities with various users.

A hand to Hyundai and Linde!

Short duration car sharing seems like it would be a better application for the technology than private use at first blush, but unless the refueling stations are co-located in the city center near where the cars are parked, keeping 50 cars refueled between customers is going to take a small team of valets to keep them ready for service.

Car2Go just switched from electric to gas smart cars in San Diego because keeping the cars charged proved to be too much work without ubiquitous charging facilities. Checking out a partially fueled car can lead to a very unsatisfactory driver experience.

OP> ...making it suited for longer journeys too, to the Bavarian lakes or the mountains for example...

This will be interesting. Drivers unable to plan adequately for the return leg will have few refueling options (if any) outside of the city center.

I am most curious to learn the take rate for H2 FCVs. It will be an interesting experiment, I wish Linde and Hyundai all the best.

Harvey, here's your chance to test your theories. Time for a European vacation?

With H2 logic building a factory for fuel stations capable of making 300 of them a year it seems that the old claim that the infrastructure will never be built out is not going to last for much longer.

It takes relatively few stations to give reasonable although sparse coverage, and Linde is going to be very well aware of the best places to site some new ones to maximise the utility of this fleet.

The problem with fielding H2 infrastructure is not that the technology is not available, but that it is so expensive, and that there is so little opportunity to recoup the cost. With 300 FCVs on the road, 30 stations serve only 10 cars each. Even when that number increases 10x, and then 100x, the income per station is still quite small relative to the capital investment.

Funnily enough Linde and H2 Logic are rather good at arithmetic, enough so as to not confuse tax rebates with true costs, which some are prone to do, for instance.

I have no idea what you are on about with 300 FCVs for instance.

The roll out of hydrogen stations and cars will of course be done in synchrony.

And until someone can come up with some practical way of providing CONVENIENT charging for the huge numbers of cars without anywhere at home to plug them in, BEVs will never, ever be a sole one size fits all solution.

Hydrogen stations are a cheap solution compared to no practical solution at all.

I have to agree with Davemart.

FCEVs may not be the very cheapest vehicles to run but they could be the most practical, lowest cost, clean running, extended range vehicles.

Coupled with short and mid-range BEVs, FCEVs could become part of the essential mix to get rid of ICEVs and associated pollution and GHG.

Never miss a chance to be nasty Davemart. It builds your brand.

Since you occasionally work up a good spreadsheet, go ahead and figure out what the H2 roll-out will really cost for the first 10 years while FCVs go from 300 sales total in EU to say, 30,000.
Don't forget the finance and operating costs.

I don't object if Linde puts $1 trillion on the table. I'm less generous minded if it's the taxpayer (anywhere). I do sincerely wish them the best.

But with the current BEV/PHEV vs FCV scoreboard, it is looking like H2 becomes a further long shot every month the numbers roll in.

Davemart the BEVs that Tesla are making will all be fully autonomous by 2020 give or take 2 years. You don’t need to charge them. The cars will charge themselves. If you own a Tesla in the city and does not have a parking space or a charger near you the car can pick you or your relatives up whenever you need and park and charge itself at another location. Self-driving ability for BEVs will be the final nail in the hydrogen car fantasy. Not only will hydrogen cars cost more in all regards than BEVs they will also not have any practical advantages over BEVs that are fully autonomous.

Note that I am not personal or opinionated about this. My reasoning is based on rational thinking and I think that people that believe in a future for FCV or gassers do it for entirely emotional reasons.

"In his 2003 State of the Union address, Bush proposed spending $1.2 billion to develop hydrogen-powered automobiles."

"The Bush administration spent more than $500 million on research into producing and distributing hydrogen so it could be used in cars powered by fuel cells."

With good green power contracts, they can make H2 less expensive. Palo Alto got a long term electricity contract for under 4 cents per kWh.

Today's materials breakthroughs and super computer simulations into nano scale are now enabling/visualizing so much technology, especially in the energy and genetic technology fields.

It's as if the 1800s automobile engineers were initially blind and then the twentieth century provided enough science to see.