NASA and Boeing have been working together to design a longer, thinner and lighter wing—so different from typical commercial transport aircraft wings that it requires a truss to provide the wing extra support. The researchers expect the lighter weight, lower drag truss-braced wing to reduce both fuel burn and carbon emissions by at least 50% over current technology transport aircraft, and by 4 to 8% compared to equivalent advanced technology conventional configurations with unbraced wings. 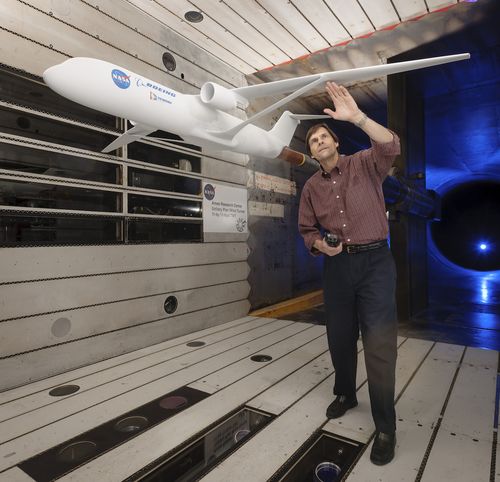 The wind tunnel model tested has a 50% greater wingspan than a comparable aircraft with current wing technology.

Engineers are using detailed computer modeling of aerodynamics to iterate the design. Using computational results showing how air would flow around the model, they modify the dimensions and shape of the wing and truss to improve areas that may generate undesirable air flow that would increase drag and reduce lift. Then engineers test models in a wind tunnel using multiple experimental techniques to validate the computations and aircraft performance predictions.

NASA and Boeing engineers are analyzing results from the recent test and plan to further explore the wing design. The truss-braced wing is part of NASA’s Advanced Air Transport Technology project, which addresses the challenge of developing energy efficiency improvements to reduce emissions and perceived community noise dramatically without adversely affecting safety.

The truss-based wing work originated as one of the outcomes of a project begun in 2008 to visualize the passenger airplanes of the future.

Every US aircraft uses NASA-developed technology. The agency is committed to transforming aviation by reducing its environmental impact, maintaining safety and revolutionizing aircraft shapes and propulsion.

The effectiveness claim is rather confusing. Is it 8% or 50% better?

I guess the bracing enables the wing to be lighter and so the whole plane is more efficient.

Note that this configuration has a very wide wingspan compared to equivalent modern planes and so will require more airport space.

With a wider wing span it would appear to me that it would also be slower or at least able to go slower in the skies. That too would also save fuel.

This should more properly be called a strut-braced wing.  You can fly one any day in a Cessna.

The point of a longer wing is to spread the downward force of lift over more air, reducing the downwash velocity and the energy lost to induced drag.  Increasing the span by 50% will cover a circle of more than twice the area, roughly halving the induced drag.  If parasite drag is not increased, the improvements will be substantial.

What's not going to be easier with these things is maneuvering on the ground.  Spacing of gates at airports is unforgiving of wider spans.  Unless these wings fold up for moving in tight quarters, this will be an issue for infrastructure.