FEV will showcase some of its 48-Volt technology capabilities at the 2016 SAE World Congress next week in Detroit. FEV says it believes that 48V technology will be the next evolution in in-vehicle power.

The proliferation of components and systems that require electrical power in today’s vehicle are pushing the standard 12-Volt battery to its limits. Under idle conditions and especially under low-temperature conditions, current 12V electrical systems can account for the entire power output of a conventional alternator, FEV notes.

Increasing the vehicle’s power network (or portions thereof) to a higher voltage reduces losses in the vehicles distribution system. At higher voltages (over about 60V) safety regulations make this a much more challenging effort.

Industry OEM’s are also facing significant challenges in terms of meeting fleet consumption thresholds in nearly all of their production vehicle segments. Vehicle electrification will play a significant role in finding a solution path.

However, the plug-in hybrid that offers so much benefit in this regard also necessitates massive intervention into the design of the transmission which generates additional cost. These costs then need to be amortized over what, at least for the moment, are relatively small production volumes.

FEV engineers are working on a mild hybrid approach that has promise, in this regard, since accommodating a 48-Volt architecture does not require a complete redevelopment of the entire powertrain. 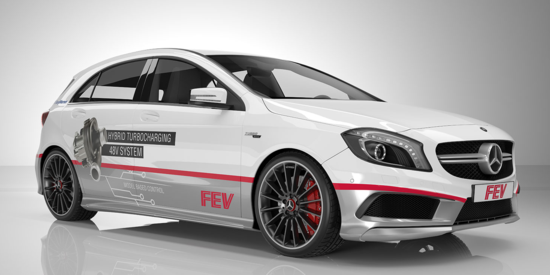 FEV engineers used the AMG45 as a technology carrier to demonstrate how a production-compatible solution might look by advantageously integrating an additional 48V E-Charger.

The result is that the elasticity and the responsiveness of the AMG A45 considerably increase and the number of gear changes can be minimized.

The E-Charger, incorporated into the AMG technology demonstration vehicle, was a way for FEV to showcase its capabilities to support this upcoming technology. The E-Charger combined with a high power vehicle electrical system supports downsized engines with high specific power by improving transient response and low-end torque.

The system’s capabilities can be used to obtain a reduction in fuel consumption of up to 15% via down-speeding or, alternatively, used to increase performance and provide even better responsiveness.

FEV engineers performed the mechanical integration of e-Booster hardware and modified the charging system, integrated the 48V electric system, and performed all the Rapid Control Prototyping (RCP), functional development and calibration for the e-Booster operating strategy. Also contributing to its environmental advantage is the fact that raw engine emissions can be reduced by supplying transient boost more rapidly.

Future FCEVs and BEVs could make good use of 48 VDC secondary system & battery for on board accessories?

This 48 Volt battery could be charged by on board main FC, main battery and/or energy recovery system via DC-DC converter?

Older and current ICEVs could stay with 12 Volt batteries.

Interim (HEV and PHEV) technologies could go both ways?

I drive a 1L turbo, I don't see the need for hybrid turbo charging, I don't really need to light my tires up that much quicker. But the 48volt system would be great, and would be very disruptive. The cigarette lighter should become obsolete.

Just to have something to pull gracefully away from stop lights without much engine power, or to capture all/most of my energy from slowing down would be great. The less I use my friction material on my brakes the better, implying much better efficiency and better longevity of those parts

We replaced the cigarette lighters with plastic plugs 30+ years ago.

The transition to 48V battery-alternator-accessories could have been done years ago but resistance to change is very strong in most majors.