As part of its LiDAR sensor development, Ford has tested Fusion Hybrid autonomous research vehicles in complete darkness without headlights on desert roads, demonstrating the capability to perform beyond the limits of human drivers.

Driving in pitch black at Ford Arizona Proving Ground marks the next step on the company’s efforts to delivering fully autonomous vehicles. The development shows that even without cameras, which rely on light, Ford’s LiDAR (units from Velodyne), working with the car’s virtual driver software, is robust enough to steer flawlessly around winding roads. While it’s ideal to have all three modes of sensors—radar, cameras and LiDAR—the latter can function independently on roads without stoplights.

Thanks to LiDAR, the test cars aren’t reliant on the sun shining, nor cameras detecting painted white lines on the asphalt. In fact, LiDAR allows autonomous cars to drive just as well in the dark as they do in the light of day.

To navigate in the dark, Ford self-driving cars use high-resolution 3D maps—complete with information about the road, road markings, geography, topography and landmarks like signs, buildings and trees. The vehicle uses LiDAR pulses to pinpoint itself on the map in real time. Additional data from radar gets fused with that of LiDAR to complete the full sensing capability of the autonomous vehicle. 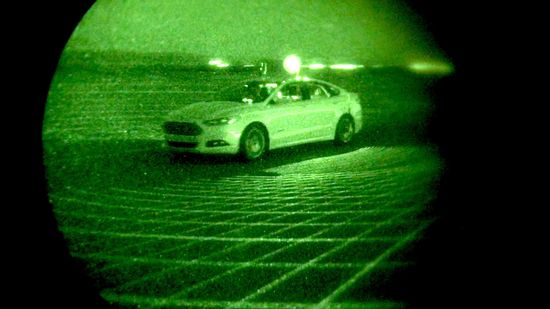 For the desert test, Ford engineers wearing night-vision goggles monitored the Fusion from inside and outside the vehicle. Night vision allowed them to see the LiDAR doing its job in the form of a grid of infrared laser beams projected around the vehicle as it drove past. LiDAR sensors shoot out 2.8 million laser pulses a second to precisely scan the surrounding environment.

Inside the car, I could feel it moving, but when I looked out the window, I only saw darkness. As I rode in the back seat, I was following the car’s progression in real time using computer monitoring. Sure enough, it stayed precisely on track along those winding roads.

After more than a decade of Ford autonomous vehicle research, the company is dedicated to achieving fully autonomous driving capability, which, as defined by SAE International Level 4, does not require the driver to intervene and take control of the vehicle.

This year, Ford will triple its autonomous vehicle test fleet, bringing the number to about 30 self-driving Fusion Hybrid sedans for testing on roads in California, Arizona and Michigan.

These developments are key elements of Ford Smart Mobility, the plan to take Ford to the next level in connectivity, mobility, autonomous vehicles, the customer experience, and data and analytics.

A shocking and telling statistic, and in itself justification to move to higher levels of sensing/automation.

This is another potential cost saving from autonomous cars. When all vehicles are autonomous we will not need street lights nor will cars need to have lights themselves apart from navigation lights signaling to other vehicles their intended drive. Of cause that light may not need to be visible to the human eye either.

Other savings. No cost of adding steering wheel, gas pedal and brake pedal. Then there is the cost savings from people being able to spend their time on work or pleasure when they drive. The cost savings from sharing of autonomous taxis between many more people getting 100k miles on a car per year instead of less than 15k miles as in private ownership. Then there is the cost savings from making extremely durable BEVs that can last 1,000,000 miles without repair of the drive train or battery and by using aviation grade aluminum and carbon fiber that also can last a 1,000,000 miles without repair absent the extremely unlikely event of an accident.

I watched mobileyes CEES presentation again yesterday and this time I took note that mobileyes say they will begin selling a suite of 360 degree sensors in 2017 that will have everything you need to make a fully autonomous car provided you can get the software done. They expect cars to get this hardware in 2017 and subsequent software updates should enable them to become fully autonomous on all roads. Tesla is buying most of its autopilot sensors from mobileeye and I am convinced that Tesla will start to produce Model S and X with these sensors by 2017 and also be in time to have the Model 3 come with this hardware. After two more years of software updates all of Tesla’s cars could be fully autonomous from model year 2017 and forward. And Tesla will have endless demand to support them in building new factories all over the planet.

The cost of lidar is also dropping swiftly, so that it should be cheap enough to be fitted to modestly priced cars:

'Quanergy chief executive Louay Edlada believes LIDAR will cost below $100 in five years. It’s releasing a solid state LIDAR — meaning none of the parts move — next month for $250.'

In 2015 the global auto industry made about 500,000 plugins. This auto segment has hitherto grown by 50% per year. When fully self-driving cars are a reality in about 2020 the demand for BEVs will become extremely strong because of its cost savings mainly by sharing cars so that they drive 100,000 miles per year and last for 1,000,000 miles or at least 5 times as much as any gasser. The world will therefore need about 20 million self-driving BEVs to replace an annual production of about 100 million non-self-driving gassers.

So Yes I believe self-driving BEVs will be very disruptive and become the biggest industrial revolution man has ever seen. It will be fast and affects 10s of millions of jobs globally in the oil industry, in the auto industry and in the steel industry because cars will not be made of steel when durability and low weight is of essence.

If Henrik's predictions are correct, the world is due for major lost of new vehicle associated jobs by 2025.
Building 20 millions eADV instead of 100 million ICEVs needs a lot less labour, materials etc.

The same would apply progressively to repair and insurance groups between 2025 and 2035?

Harvey. It is not a prediction only a thought to provoke some action to set priorities right (like focusing on autonomous BEVs) in an almost sleeping industry that has not seen disruptive change for 50 years or so. I don’t believe in anything growing at 50% for nine straight years. The growth will slow because it takes time to educate and hire people with new skill-sets like high voltage engineers and electricians. You also need a lot of new capital to build the necessary factories. 20 million autonomous BEVs will require 40 times Tesla’s capacity in 2020 when they are at full speed at the 50GWh Nevada battery factory and their Fremont assembly plant. Each 500,000 unit capacity will require about 10 billion USD in investment so about 400 billion USD need to be invested. That is still only what was spent in 2 years in Iraq and Afghanistan but anyway.

However, I do predict that a constellation of Tesla, Apple and Google can do 20 million autonomous BEVs per year by 2030 without help from any of the old automakers. But I hope there is still life at the old automakers and they will also be part of the game. Their intellectual property with regard to combustion engines is becoming worthless shortly after 2020 and they will all have to make some hard choices to focus their resources on growth areas instead of unsustainable technologies like the gas engine.

I too wish that (eADVs) autonomous drive electrified vehicles (BEVs and FCEVs) will progressively replace most ICEVs at a faster rate.

Increased safety, more efficiency, less GHG and pollution would justify the cost ($1500B to $2000B for Canada/USA) of transition (including e-charge stations and H2 stations) over 20+ years. A mere $100B/year for both countries ($90B/year for USA and $10B/year for Canada) is doable. That is less than what is hidden away in tax paradises (from USA and Canada).

We have a huge Hydro surplus (till 2027+) but we are to stupid to use it with BEVs/FCEVs and associated public quick charge and H2 stations. Our government prefers to cash in the $3B/year profits to pay for running bills 60,000 migrants and bombing/fighting DAESH/IS in Irak and Syria. Meanwhile we continue to import 80+% of all the Oil we consume, mostly from DAESH/IS supporting countries.