Three emerging and converging factors—connectivity, autonomy and transport-as-a-service—will fundamentally change the automotive industry over the next few decades, according to Mike Abelson, GM’s VP of Strategy and Global Portfolio Planning.

The basic DNA of the automotive industry—i.e., the way the vehicle operates and the supporting business structure—has remained more or less the same for the past 100 years. Automakers make most of their money by selling vehicles to individuals for personal transportation.

I would ask you to think about the economic efficiency of our transportation system. An economist would make the point to all of us in this industry that an automobile is often-times the second-most valuable asset that a family owns and yet it sits unused 90% of the time. To an economist, that is a clear indication that there is an industry with a lot of potential for change.

Sustainability and efficiency will continue to drive the industry, Abelson said. In his overview of the importance of electrification technologies, Abelson was much in alignment with Justin Ward from Toyota, with both of them referencing electrification as a spectrum of capabilities from stop-start to high-end battery-electric and fuel cell vehicles. 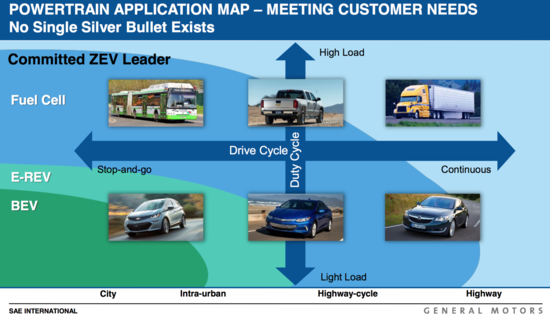 While he touched on the “very geeky core engineering competencies talked about for number of years” of electrified propulsion and lightweighting, Abelson chose to focus more on the disruptors.

Abelson noted that through OnStar, GM has been working with connectivity for some 20 years. The company now has 2.8 million vehicles on the road with 4G LTE connectivity.

Here’s the sort of explosive growth that you hear talked about in the software industry, but not so much in our industry. I take this as a real indicator that this idea of connectivity, of giving customers connectivity to their vehicles but then going forward giving the vehicle connectivity to the wider Internet of Things is an important trend and one that will change how cars interact with their environment.

Ridesharing is another disruptor. There are a lot of advantages to ridesharing, especially in urban areas, Abelson said, noting that the growth there has been explosive as well.

I emphasize that ridesharing is not going to replace personal vehicle ownership anytime soon. But it is sort of the point of the spear on the idea of transportation as a service and these changing business models. We think that the combination of these changing business models and some of these other technologies make for some very interesting opportunities going forward.

We see this ride sharing service, this idea of transportation as a service as a very important trend going forward. It won’t replace personal vehicle ownership anywhere in short term, but it does enable other interesting things. We were very explicit when we invested in Lyft—we are investing with a view toward future of on-demand autonomous services.

Connectivity is only needed for software and mapping updates and for uploading freshly made maps to datacenters from the databank of the autonomous car. All that can be done when the car is not moving. For privacy and security reasons the car’s driving related systems should not be connected when in motion. You can have a separate cell phone data connection for work etc but the car should not be connected itself. It is not needed for autonomous driving and people in general do not want it for privacy reasons.

USAF will soon have their own pilotless fighter Jets to help the existing pilotless drones. Boeing has equipped 5 old F-16s. Tests are already done successfully.

About 80% to 86% of existing commercial-private aircraft accidents could be avoided with pilotless planes. Such planes could fly 24/7 with reduced and/or no human air traffic controllers. Essential flight separation could be done by the on-board and/or ground based flight computers.

Fully automated weather (current and forecast) data can be made available to avoid extreme weather conditions.

The same can be said about automated drive taxis and city buses.

Unfortunately, essential regulations may delay applications by 20+ years or so.