A prototype self-driving truck under development by Scania and Swedish research universities has tested successfully at speeds of up to 90 km/h (56 mph). According to the research lead at KTH Royal Institute of Technology, the successful tests are aimed at implementing self-driving Scania trucks in mining operations within a year or two.

KTH, Scania, Linköping University, Saab and Autoliv and collaborating in a government-funded project called iQMatic, which is aimed at to develop a fully self-driving truck for difficult environments such as mines. With much greater mass and built-in inertia than passenger cars, such trucks present a greater challenge for autonomous driving. 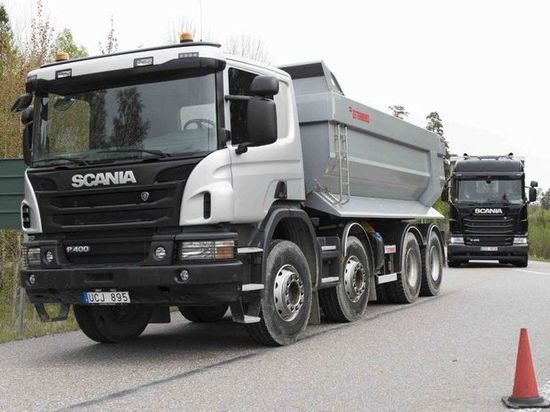 We have come a long way with the work and have already proven with a real truck that the task is possible. The truck drove itself with a maximum deviation of 20 centimeters from the road’s center line. It performs very precisely, even at higher speeds.

The next big demonstration of the Scania truck is in May. A demonstration in a real mine is scheduled for the late autumn, Wahlberg says.

The concept has developed to the point where the prototype truck (named Astator) can safely handle obstacles on the road and carry out tasks such as picking up and unloading gravel.

Several researchers from KTH are participating in the project, including Pedro Lima and Wahlberg, who together with Jonas Mårtensson have spent the last two years developing the truck’s control algorithm so that it is as accurate and reliable as possible. Using model predictive control (MPC), the truck can drive by itself on narrow and winding roads.

MPC systems can provide guidance for autonomous vehicles due to their ability to predict the vehicle behavior for a given set of inputs. MPC can handle nonlinear time-varying models and constraints methodically.

As the name implies, the model can predict the vehicle’s movements in every given situation, on the basis of information about what direction it’s being steered in, how much throttle is given and alternatively how much braking force is applied.

In 2015, the team reported on their development of a clothoid-based model predictive control system for autonomous driving:

We formulate an MPC controller that provides a smooth driving to the autonomous vehicle by taking advantage of a special type of curves: clothoids. We propose a novel clothoid-based LTV-MPC controller (LTV-MPCC). Clothoids are used for road design since their curvature vary linearly with the path arc-length. This prevents sudden changes in lateral acceleration and therefore yields low values of lateral jerk. With our approach, we are able to compute smooth driving controls while predicting the vehicle behavior along a long prediction distance.

The team’s clothoid-based MPC makes it possible to minimize deviations from the intended path, and maximize passenger comfort, by reducing side-to-side jerks in the steering, as well as through acceleration and braking. It can also maximize the vehicle’s fuel consumption benefits.

Lima adds that the control method can handle both non-linear dynamics and constraints, which is important for preventing the truck from tipping over on sharp turns.

Moreover, Astator has two steering axles. The truck’s calculation model thus has to be more complex and resource intensive. Self-driving trucks need new information every 50 milliseconds to make the right decisions about the steering, accelerator or brakes, Wahlberg says.

These autonomous drive heavy trucks could reduce the highly paid mining field staff by half in many places and greatly reduce costly accidents?

Automated loaders may be the new step?