The 2016 Chevrolet Malibu Hybrid (earlier post) is EPA-rated at 46 mpg (5.11 l/100 km) combined, 47 mpg city and 46 mpg highway; the powertrain shares the transmission architecture with the 2016 Chevrolet Volt extended range electric vehicle (EREV), but includes changes to optimize the system for engine-driven charge-sustaining operation in the range of conditions represented by the US EPA 5 cycle fuel economy tests.

At the 2016 SAE World Congress, GM engineers presented a paper describing the development of the new hybrid powertrain for the popular mid-size sedan. Development was guided by four main objectives:

Engine subsystem. The engine subsystem includes associated thermal and emissions hardware. The Malibu Hybrid has a larger 1.8L displacement engine than its predecessor. The new engine is fitted with an exhaust gas heat recovery (EGHR) system. GM chose the displacement as a result of system balancing of engine vs. battery size and power to meet packaging constraints and the performance and fuel economy targets for the vehicle.

The engine—dedicated to the hybrid system—features cooled Exhaust Gas Recirculation (EGR)to reduce pumping losses, and incorporates a hybrid dedicated combustion system with relatively high compression ratio of 11.5:1. An integrated exhaust manifold improves packaging, and, in conjunction with the EGHR system and SVCC catalyst, helps to reduce engine warmup time and fuel use during warmup.

The EGHR improves the overall vehicle efficiency under cold ambient conditions by recapturing about a third of the wasted exhaust power and using it to warm the engine coolant. The system allows the engine to warm up more quickly and enables a higher coolant temperature during cold operation.

Voltec drive unit. The drive unit is a transaxle configuration comprising transmission gearing and clutches; hydraulics; electric machines; and integrated power electronics. The basic layout is an on-axis design which is similar to GM’s 6T40/45 family of small-car front-wheel drive automatic transmissions. The center distance and vertical drop between the engine and output axes were designed to be common; this design approach enables the use of a common chain transfer design and final drive gearing, which provided a wide range of final drive sprocket and planetary gear sets allowing an effective final drive ranging from 2.64 to 3.50.

The transaxle includes two electric machines coaxial with the input shaft as well as an integrated Power Inverter Module which connects via busbars to the motors. The Power Inverter Module and motor stators are common between the EREV (Volt) and HEV (Malibu) versions. However, the transaxles were designed with unique rotors specific to the application. The stators utilize a bar winding design, while the rotors are two barrier interior permanent magnet designs using NdFeB magnets.

While the Volt application uses a Ferrite rotor in Motor A, the Malibu HEV application switches to NdFeB, due to the difference in Motor A utilization. In the hybrid, when operating as an EV, unless axle torque is very high, all propulsion power is provided by motor B, and motor A is unloaded but spinning. When the hybrid is operating with engine on, motor A torque is commanded to react engine torque in either low or high range. In the SAE paper, the GM team explains:

NdFeB magnets have higher strength than Ferrite magnets, which allows a reduction in copper losses, since less current is required to produce torque. However, iron losses at no load increase with stronger magnets. In an EREV vehicle, the system will operate as an EV most of the time. With this usage schedule, reduction of motor A iron loss is of primary importance in order to improve EV efficiency and maximize range. However, in the HEV vehicle, due to more frequent engine operation, it was important to balance reduction in copper and iron losses in order to maximize fuel economy.

… the motor operates at higher torque and lower speed in HEV mode than in EV mode, predominantly in the area of NdFeB motor advantage. Simulation studies showed that the NdFeB magnet motor provided a fuel economy benefit, and due to this, the NdFeB Magnet motor was selected for the HEV configuration in order to reduce cycle average losses for HEV vehicle usage.

The Malibu hybrid drive unit uses Low and High modes. Low mode is capable of high output torque and acceleration; High mode allows the system to operate efficiently at lower engine and motor speeds and with less power transmitted through the motors and inverter. GM developed a transmission shift control strategy allowing a shift between Low and High modes to occur without transitioning through the fixed speed ratio.

Battery pack. The air-cooled battery pack is mounted in the vehicle trunk. The accessory power module (APM) is located on top of the battery pack cover and shares the same thermal system. 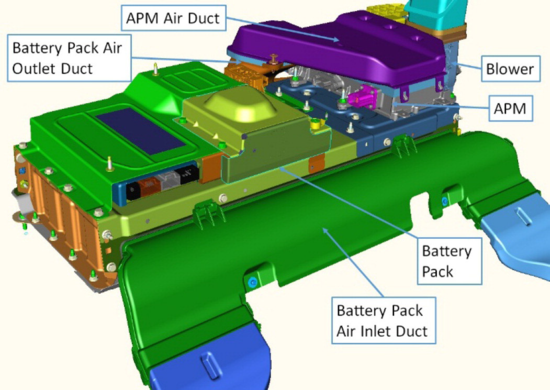 Operation. Lowest fuel consumption—representing the highest efficiency of the engine—covers a power band of 12 to about 40 kW. The system thus tends to select engine operating points within this power band, using battery power as necessary to adjust engine power demand.

As examples, in operation on the EPA FETS cycle, driving intensity and vehicle speeds are relatively low; on this cycle, the system operates with the engine on only 22% of the time. During accelerations below 30 to 40 mph, the system tends to operate in low range or fixed gear, depending on the vehicle speed and the power required.

The battery is usually charged at these points to provide for electric driving at low loads and/or speeds. When driving at constant speeds, if the engine is on, the system operates in high range at lower engine speeds and powers.

On the US06 cycle—representative of higher driving intensities—the engine is on 76% of the time. Low and high range operating points tend to shift to higher engine powers, and there is less low range operation due to the higher average speed of the schedule.

Other similar HEVs from Toyota, Hyundai, Ford etc will have some catching up to do to match this performance?

Very transparent technical interchange from GM: thanks and good work to the Detroit team.

I am now back in a Volt after a brief sojourn in a Leaf and glad to be there. Still a mere 2013 model but near-perfect and very few miles... I forgot how much I liked it! 30-35 E-miles will do, and I love the flexibility.

As I am phasing toward retirement it makes no sense for me to get involved in a $35-40k new Volt that sits in the garage while I travel 15-20 weeks a year on business. But if you get a chance to drive one, do: they are really a beautiful execution of the art, and while there's no convincing the Teslacolytes the Power Electronics and overall propulsion control integration by GM is at the top of its class.

For me, the series- parallel architecture for hybrid vehicles is a good solution. With a double planetary gear set is a most. The difficulty is how to shift from one set to the other. Here we use clutches. Unfortunately clutches have well-known disadvantages. Particularly, we lose the rotation speed accuracy of the shafts provided by the synchronic motors. Some double gear set devices have roughly the same functions despite they are using a single dog clutch which in addition avoids torque disruption. Refer to: http://contest.techbriefs.com/2015/entries/sustainable-technologies/5453

I see the AC pump is belt driven. Why couldn't they use an electric motor drive like a Prius and save some fuel and maintenance?