ContiTech has supplied the entire engine mounting system for the 2016 Chevrolet Malibu. Almost all the functional components of the hydraulic mounts are made of polyamide. The significant increase in high technology polyamide elements has resulted in a weight reduction of around 20 percent in the mount components.

This development shows very clearly that the lightweight construction trend is becoming increasingly significant for the US market as well and that polyamide components have finally arrived in mid-size cars too. 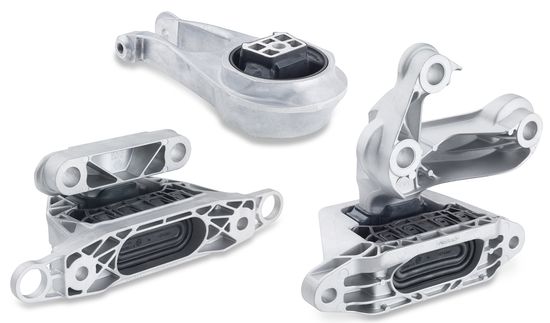 For the current vehicle models, ContiTech will supply a total of three engine mounts and their attachments. These include an engine mount and a transmission mount, which combine to support the drive unit and hydraulically dampen vibrations, and a torque rod support, which absorbs torque.

A particular challenge in the development of the new components lay in the nature of the newly developed 1.5 l engine – its smaller size means that, conversely, the engine mounts have become considerably larger. To reduce the weight at the same time, ContiTech developed a completely new design.

We were able to replace all the internal components with much lighter polyamide versions. Only one steel component has been retained, and the crash-relevant parts are still made of aluminum because of the limited installation space.

Changing to polyamide has also opened up many more options for the designers. It was possible to make the components more detailed, smoother and therefore more streamlined, enabling greater functional efficiency.

The ContiTech division of Continental is one of the world’s leading suppliers of technical elastomer products and is a specialist in plastics technology. It develops and produces functional parts, components, and systems for machine and plant engineering, mining, the automotive industry, and other industries. ContiTech generated sales of almost €5.4 billion in 2015 and currently employs approximately 43,000 people in 44 countries worldwide.

... and what a nice car the new Malibu is! It has finally climbed its way back into a very strong place in the hypercompetitive "family sedan" class (6,Sonata, Forte, Camry, Altima, Accord, Fusion, 200, and Impreza). Although you might argue that the Mazda 6 is a "sportier" ride in its base trim, the NVH issues are really in your face. I'd take the Malibu any day.

The lightening successes (like this) and engine downsizing have resulted in a car that most of us couldn't have imagined even five years ago: under 1500kg, an engine under 1500cc (!), great fuel economy and quiet, good performance in a 5 seater, all at a very good price.