Based on its Buy America compliant and proven Xcelsior X60 heavy-duty transit bus platform, New Flyer partnered with Ballard Power Systems Inc. and Siemens to develop the propulsion system. The bus will be operated in revenue service by AC Transit for 22 months following the completion of a comprehensive evaluation at the FTA’s Altoona test facility.

Following this, New Flyer intends to offer these hydrogen fuel cell-electric 60-foot buses to customers throughout the United States and Canada.

The propulsion system includes a combination of batteries, a fuel cell, and hydrogen storage that allows the fuel cell to operate at a relative steady-state, while the batteries capture both braking energy and provide power for bus acceleration. The bus is targeted to have a range greater than 250 miles without refueling or recharging. 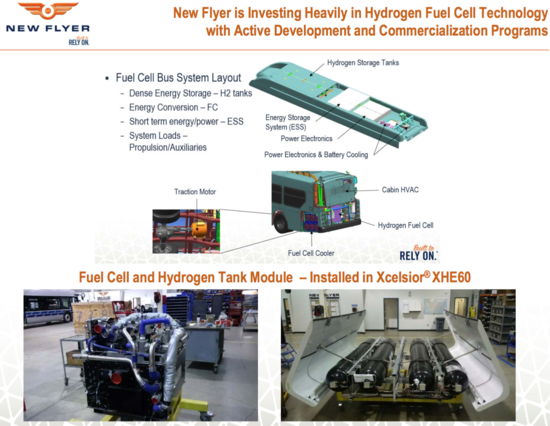 New Flyer is the sub-recipient of a Federal Transit Administration (FTA) Grant administered by CALSTART, a non-profit organization that is focuses on clean air technology commercialization with business, fleets, and government. The FTA’s National Fuel Cell Bus Program is a cooperative initiative between government and industry to advance the commercialization of fuel cell technology in US transit buses. The goals of the program include facilitating the development of commercially viable fuel cell bus technologies, improving transit bus efficiency and reducing petroleum consumption, and reducing transit bus emissions.

What a waste of money...

The Excelsior X-40 (40-ft) bus is available as a diesel and as an all electric city unit.

The Excelsior X-60 (60-ft) bus is an articulated bus and is available as a diesel unit and/or as a FC unit.

Of course, large H2 stations will have to be built at city bus depots and at every 400 Km or so on main highways for inter-city buses and trucks.

Many of the above H2 stations could be used by the general public for their FECVs.

The economics of hydrogen use in fuel cells show them to be too expensive to buy and to operate. Battery powered buses are more CO2 efficient even if H2 is made with solar energy because the losses involved make it more efficient and lower cost to charge a battery than to make hydrogen and put it into a fuel cell. Making sodium to use in a fuel cell would be more efficient. Overhead charging rails can be put at any stop in any city if necessary. ..HG..