Designed to provide automakers with a new standard in material performance, the sheet steel is poised to accelerate vehicle lightweighting initiatives focused on affordably meeting rising global fuel-economy regulations. Production of the material, targeted to the $100 billion-plus automotive steel market, is the result of a multi-year joint development program between NanoSteel and AK Steel Corporation—an industry-leading innovator in steel product development. 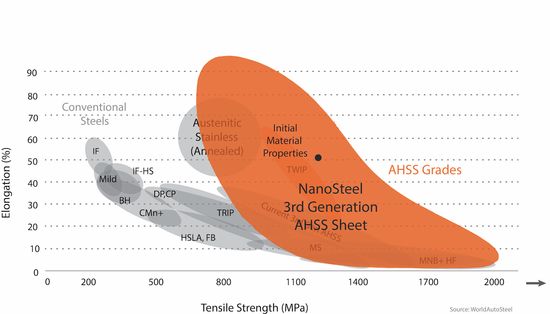 Many advanced materials with outstanding properties end up abandoned because they are too hard to use or too expensive to make. NanoSteel’s advanced high strength steel is designed to be both easy to produce—using conventional alloying elements with standard slab casting equipment; and easy to use—enabling the stamping and forming of parts at room temperature without additional manufacturing infrastructure or investment, such as that required for ‘hot’ stamped parts.

Dearborn Works was selected for this project due to the configuration of its existing galvanizing line and state of the art technology. Commissioned in 2011, the HDGL allowed for efficient modifications to produce these Next-Generation Advanced High Strength Steels. The modifications enabled AK Steel to install the new technology to produce coated and cold-rolled products at a fraction of the cost of a new production line.

NanoSteel was born out of six years of research conducted at the Idaho National Laboratory (INL) in Idaho Falls and funded by internal INL grants, the Defense Advanced Research Projects Agency (DARPA) and the United States Department of Defense. Upon its incorporation in 2002, NanoSteel was awarded an exclusive world-wide license to the technology and material discoveries developed from the INL research. NanoSteel has conducted on-going research and development at the company’s R&D laboratory in Idaho Falls to build upon that foundational technology.