Continental has developed and tested car tires and engine mounts with rubber made from dandelion roots. In 2014, Continental brought onto the road the first sample of a premium winter tire featuring tread made from dandelion rubber. (Earlier post.) At the end of 2015, ContiTech tested the new renewable resource, named TARAXAGUM, in engine mounts. The company is striving for series production in five to ten years.

Continental says that the plant has the potential to become an alternative, environmentally friendly resource and could further reduce dependency on traditionally produced natural rubber. Not only this, but because it grows under moderate climatic conditions, it can also generate savings in CO2 emissions and transport costs. 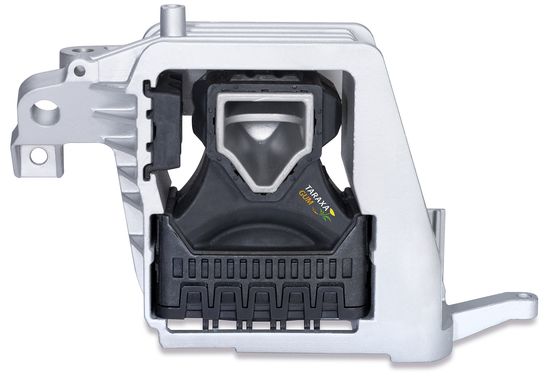 Vibration Control is one of the biggest consumers of natural rubber within ContiTech.

We rely on natural rubber for our engine mounts and vibration control elements. This is the only way that we can guarantee the outstanding properties of our products with regard to dynamics, flexibility, and service life.

—Dr. Anna Misiun, who leads the activities involving engine mounts made from dandelion rubber at ContiTech

Engine mounts connect the drive assembly to the body. They bear significant static loads, insulate the structure-borne sound of the engine, and limit the engine’s movements. This prevents the passengers in the car from being shaken about, for example, or the engine from tearing off altogether in the event of an accident.

We require additional, entirely different properties from natural rubber than our colleagues in the tire department. Our products have to withstand very large dynamic loads at high temperatures. Rubber made from the roots of the dandelion plant is a genuine alternative to traditional natural rubber from the Hevea brasiliensis tree. Our tests gave us an even better understanding of the material. We also demonstrated the benefits that dandelion rubber can have in high-tech applications such as engine mounts.

Continental is working with the Fraunhofer Institute for Molecular Biology and Applied Ecology (IME), the Julius Kühn Institute, and plant-breeding company Eskusa on dandelion rubber.

Conventional natural rubber has been obtained exclusively from rubber tree plantations in the world’s rainforest regions—the “rubber belt”. Demand is high, but the crop cultivation process is tedious and the ecological consequences are immense. Transportation often takes the raw material halfway around the world, but there is no viable alternative for the moment.

Unlike rubber trees, dandelion can grow under moderate climatic conditions, and could therefore be cultivated directly at production locations worldwide. The dandelion plant itself flourishes on barren, nutrient-poor land that cannot be used productively for any other crop plants. Cultivating this plant would not result in any competition with food production, and land that has previously fallen fallow could be brought back into use.

Opening up other areas outside the rubber belt for crop cultivation may also relieve the pressure on the rainforest that is being exerted by the increasing demand for natural rubber.

A particular advantage compared with other rubber suppliers is the considerably shorter cultivation period of six to eight months. This could also cover short term rises in demand.

One of the biggest challenges to commercialization will be obtaining the material on an industrial scale. The conditions for this are currently being established, and the research team is working to optimize the seeds and develop suitable cultivation and harvesting technology. The first farmers have been convinced to provide suitable land for cultivation of the plant in real-life conditions.