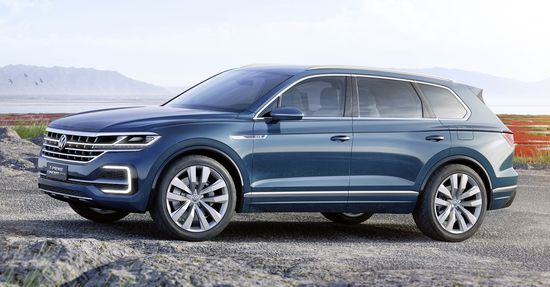 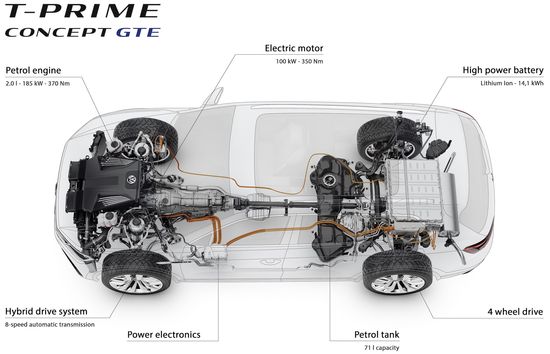 The T-Prime Concept GTE is based on the Volkswagen Group’s modular longitudinal platform (MLB); it covers full-size models with longitudinally mounted engines and gearboxes. The concept vehicle is 199.6 inches long. By means of comparison: the SUV is 0.4 inches longer than the first-generation Phaeton. This Volkswagen, which is equipped with two individual rear seats, has a width of 78.7 inches and is 67.2 inches tall.

Powertrain. The concept car is powered by a 375 hp plug-in hybrid drive, incorporating an electric motor, turbocharged gas engine, and battery, which can charge externally or during the drive. With a sufficiently charged battery (14.1 kWh energy capacity) this SUV—like all Volkswagen GTE cars—always starts in the practically silent electric E-Mode.

It permits up to 31 miles (50 km) of zero-emission driving in metropolitan areas. GTE mode forms an efficient alliance between the electric motor that is integrated into the housing of the 8-speed automatic gearbox and the 2.0-liter four-cylinder turbo engine (TSI).

The T-Prime Concept GTE is equipped with 4MOTION permanent all-wheel drive, which distributes power to the front and rear wheels via the limited-slip differential, which is also integrated into the 8-speed automatic gearbox.

From a completely flat state, the Li-ion battery will fully charge at a 220V outlet at a charging power of 3.6 kW in eight hours. It is also possible to “fuel up” at public charging stations at a power of 7.2 kW. Then the battery is fully charged after just two hours and 30 minutes.

The T-Prime Concept GTE can be driven in three different drive modes: E-Mode, Hybrid, and GTE. The system is designed so that the drive utilizes battery energy first, and so it starts off in E-Mode.

While driving in E-Mode, the driver can intentionally activate the TSI and therefore the Hybrid mode by pressing the accelerator pedal beyond a defined pressure point. The driver can return to the zero-emission E-Mode via touchscreen at any time (provided that the battery still has sufficient charge); in this case, the all-wheel drive is also active.

The GTE mode can also be activated via touchscreen. The driver brings out the most agile character of the SUV in this mode. The accelerator pedal, gearbox and steering characteristics are now even sportier. In boosted GTE mode, the TSI and the electric motor also work together to access the full system power and maximum system torque.

As soon as the driver releases the accelerator pedal, all drive sources are shut off and decoupled from the drivetrain, provided that the battery is sufficiently charged. In this form of coasting, the electric motor operates as a generator and feeds the energy recovered from braking into the lithium-ion battery. In this case as well, the TSI is shut off and decoupled. 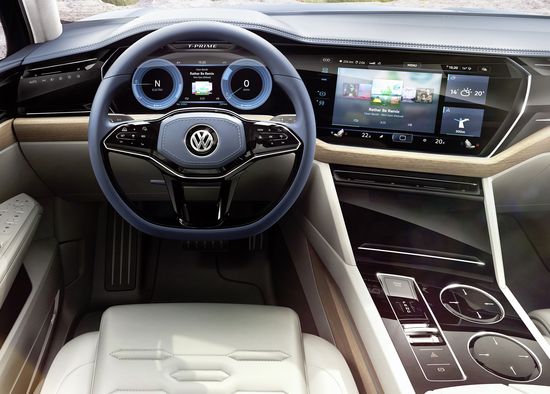 The new Active Info Display of the T-Prime Concept GTE has a 12.0-inch screen. All indicators are virtually implemented in software—such as the power meter that is typical of a Volkswagen with a plug-in hybrid drive and the speedometer. In the middle, between these two round instruments, all imaginable information can be shown by thematic tiles.

In Navigation mode, for instance, a 3D map display can be shown. Here the power meter and speedometer are relocated to the sides to make more room for the map display. Information such as navigation and assistance functions, phone contact images or the coverflow of the media library may be shown, depending on what is needed.

The curved home screen of the 15.0-inch infotainment head unit can be configured by the driver or front passenger. Here, three thematic tiles can be freely arranged on a defined screen grid or can be bundled. Users can fill a large main screen area with a wide variety of content or menu levels, such as two smaller thematic sub-areas. Content includes the media library, weather data, voicemails or navigation instructions.

In exactly the same way, the individual thematic tiles of the Active Info Display can be configured in the head unit first, and can then be moved to the digital instruments by a swiping motion. This is a new technological and intuitive type of user operation that is simply fun to use. The user can always press a home button located low and at the middle of the head unit to return to the top menu level from any other menu. To the left and right of the home button are capacitive control surfaces for climate control and for seat heating and seat ventilation.

Features of the T-Prime Concept GTE include “by wire” control of the gear shift unit for the 8-speed automatic gearbox on the center console. This is implemented as a glass scroll wheel with a chrome surround that is fitted with sensors which enable intuitive operation of functions. Located in front of this glass scroll wheel is a display with a virtual scroll wheel—as soon as the driver operates the real roller, the roller in the display turns accordingly. Implemented as touch-sensitive surfaces are the controls around the glass scroll wheel for the hazard warning lights, the Auto Hold function, starting and stopping the engine and the electric parking brake.

Another highlight is the multifunction steering wheel without switches. The smooth surface of the multifunctional areas use touch feedback. The individual functions are activated by pressure or with a swipe gesture. When the surfaces are touched, the driver of the T-Prime Concept GTE gets touch feedback, or “pre-sensing”, which lets the driver locate the function. As soon as the driver activates the function, the control gives stronger tactile feedback.

A 9.6-inch display surface is also located between the two individual seats in the lounge-like rear seating area; it was integrated in the continuous surface of the center console. From here, users can adjust climate controls and seat adjustments using touch-sensitive surfaces. A tablet (10.1-inch) snaps onto each backrest of the front seats. These tablets let rear passengers access all conceivable media library functions.

An array of assistance systems ensures top levels of safety and convenience in the T-Prime Concept GTE. These systems contain numerous technologies, and they enable such processes as semi-autonomous parking.

The importance of SUVs. SUVs are booming worldwide, and this is especially true in the segment of the large C-SUVs to which the T-Prime Concept GTE belongs. Forecasts for China predict 18% growth between 2017 and 2023; in Europe and Russia growth might even reach 26%. Around the globe, annual volume of the exclusive SUVs will reach the milestone of two million unit sales around 2020. With the new T-Prime Concept GTE, Volkswagen is now responding to this trend.

Volkswagen says it wants to offer an exciting SUV in every relevant market segment. The product campaign starts this spring with the global market launch of the new Tiguan which will also be offered with an extended wheelbase in certain markets.

Following in car classes above it are a new mid-size SUV (for the USA and China), the successful Touareg and a vehicle in the style of the T-Prime Concept GTE. Beneath the Tiguan, two new SUV model series will make their debut simultaneously: in the Golf class, there will be an SUV inspired by the T-Roc concept, and the T-Cross Breeze that was presented in Geneva shows the direction that will be taken in the Polo class (SUV).

The T-Prime Concept GTE was created under the leadership of Dr. Frank Welsch, Member of the Board of Management for Technical Development Volkswagen Brand, and Klaus Bischoff, Head of Design at Volkswagen.