In Europe, Ford revealed the all-new 2.0-liter EcoBlue diesel engine—the first in a new range of diesels that will offer optimized fuel efficiency and reduced CO2 and NOx emissions. Building on the performance and technology of Ford’s award-winning EcoBoost gasoline engines, the EcoBlue diesel range will deliver power outputs ranging from 100 PS to 240 PS (99 to 237 hp). 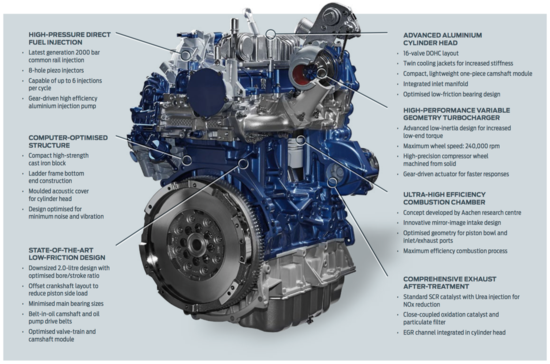 Developed by Ford engineering teams in the U.K. and Germany, the versatile all-new 2.0-liter Ford EcoBlue engine initially will be offered with 105 PS, 130 PS and 170 PS in commercial vehicle applications. Capable of delivering more than 200 PS, the engine will later feature in Ford passenger cars alongside further new EcoBlue engines—including a 1.5‑liter variant.

This symmetrical arrangement ensures uniform mixing of fuel and air in the combustion chambers of all four cylinders, helping engineers more closely control the way the engine burns fuel. When fine-tuning the combustion process, computer experiments used measurements from more than 1,400 factors that affect performance of the valve lift and timing alone.

Our first ever mirror-image inlet design in combination with an optimized combustion chamber layout helps us turn fuel into energy more effectively than any diesel engine we’ve ever produced.

New fuel injectors are capable of delivering up to six injections per combustion event, with each injection taking as little as 250 microseconds (0.00025 seconds) and delivering 0.8 mg of diesel—equivalent to a grain of sugar. This tiny volume of fuel is injected through eight conical holes each 120 microns in diameter—about the width of a human hair.

Advanced turbocharging. The all-new compact turbocharger has been specifically designed to deliver more air at lower engine rpm compared with the outgoing 2.2-liter TDCi engine, for a light and urgent feel across the rev-range and up to 340 N·m (251 lb-ft) of torque at 1,250 rpm.

An aerodynamically advanced turbine wheel—made from Inconel, an alloy used in extreme temperature environments such as rocket engines—is reduced in diameter by almost 10%. The aerospace aluminium grade compressor wheel is reduced in diameter by 15%. The reductions decrease inertia and enable faster boost performance with wheel speeds up to 240,000 rpm, contributing to improved low-end torque.

One important factor we noticed through customer feedback is a growing tendency for drivers to ‘creep’ their diesel-powered vehicles by engaging the clutch while the engine is at idle, making low-down torque even more essential.

Compressor wheels are milled from solid, rather than cast, improving tolerances to within two or three microns, increasing durability and reducing noise and vibration. A new turbocharger actuator replaces a worm drive with a geared design that halves response times to 110 milliseconds.

Ford says that the new engine will comfortably meet future European emissions requirements by using Ford’s first standardized selective catalytic reduction system. The system is close-coupled to the rear of the engine for maximum efficiency and excellent cold-driving performance. A short-loop exhaust gas recirculation channel is incorporated into the cylinder head, contributing to a more compact engine design and helping optimize cooling of gasses.

The new engine radiates half as much sound energy at idle as the 2.2-liter TDCi diesel engine. A noise-optimized cylinder-head, block, stiffening ladder-frame and oil pan are specifically developed to be desensitized to activity inside the engine, and non-flat mating surfaces are carefully designed to offer tight seals that trap noise within the engine.

A moulded acoustic cover that provides foam encapsulation of the cylinder head, and a front cover made from sound deadened steel, further prevent engine noise being transmitted to the cabin for a quieter driving environment. Additional measures taken to enhance NVH include:

The engine’s performance has been put through the equivalent of 5.5 million km (3.4 million miles) of durability testing including 400,000 km (250,000 miles) at the hands of real-world customers, comprehensive analysis in laboratories and at Ford vehicle proving grounds, and CAE evaluations at every stage of development.

now that carbon age is over they bring up all this nice high-tech engines. oh wait they can use also syn fuel!
precision to a micron level 0.001 mm - i must be dreaming
what? excellent cold driving performance well thats not necessary - my garage is solar heated
growing tendance to 'creep' their engines oh me too i have a creepy engine
folks i have to say all this just leaves me speechless
nice job honestly
i never thought anybody would have the courage to speak about
diesel engines in the forseeable future

I'm pretty sure syn fuels, hydrogen powered vehicles, battery electrics and fossil fuels will all play a role in the future...though I'm not one for understanding riddles like you posed.
A diesel with SCR and NOx cat, and DPF will be cleaner than almost any ICE engine on the road.(except for themselves). It's hard to meter diesels because of them not having a throttle, but they are very clean. Gasoline cars might go this way too. VW didn't have many active systems, so they were unable to meet the standards.

I'm pretty sure if gasoline/diesel gets taxed to $6 a gallon like a lot of you wish, there will be drop in alternatives showing up before BEVs take over.