The aim of the HYBRIT (Hydrogen Breakthrough Ironmaking Technology) project is to reduce carbon dioxide emissions from ironmaking to zero by eliminating the need to use fossil fuel for iron ore reduction. The idea is to replace the blast furnaces with an alternative process, using hydrogen produced from “clean” electricity.

Steelmaking starts with the processing of iron ore (Fe2O3) into molten iron. Blast furnace ironmaking or any ironmaking process requires more energy and releases more CO2 than any other process to produce steel. The reduction of Fe2O3 (iron ore) to Fe (iron) is by far the most energy-intensive step. 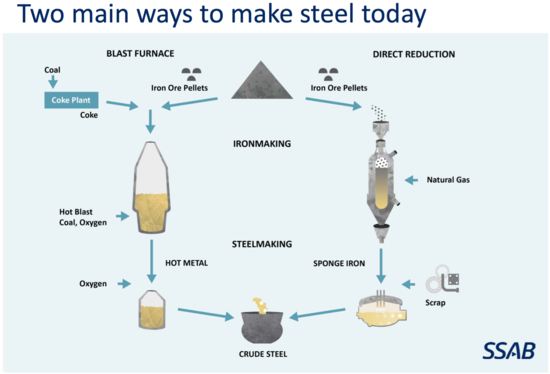 The direct reduction method of ironmaking (DRI) was originally developed to overcome some of the energy and emissions difficulties of conventional blast furnaces.

Conventional direct reduced iron is produced by the reduction (removal of oxygen) of iron oxide lumps or pellets at 800-1050 °C—below the melting point of iron (1536 °C)—by interaction with reductants (H2+CO) derived from natural gas or coal.

The specific investment and operating costs of direct reduction plants are low compared to integrated steel plants and are more suitable for many developing countries where supplies of coking coal are limited.

The basic concept behind HYBRIT is to replace the reductants with hydrogen produced from “clean” electricity from Vattenfall.

The HYBRIT project has an almost 20-year timeline:

I like it. Steel is cheap we need it for armored concreate and inexpensive panels in cars. Go ahead make it. Use hydrogen from wind power and only make steel when there is excess supply of wind power in a grid 100% based on wind and solar. There will be many days during the year when wind and solar make "too much power" and that should be when those steel mills are powered up.

So where is this hydrogen supposed to come from? Electrothermal splitting of water is inefficient and destructive of equipment. Efficient use of the furnace requires 24/7 operation, and there is no demand management insighthere concerning the integration of renewable power. Hydrogen is a bitch to store, and the key is temp-pressure-zone flow control which will require a heat sink and some quenching. A plus at least is that you can recover heat from the steam to help H2 regeneration and play with N2 and argon in the process.

Incredibly much iron pellet is manufactured with the combustion of trees in Brazil -- not very renewable considering the infancy of tree management there. That would be the source of the reduction carbon -- within the pellet. The hydrogen thus added would be comparatively small but most feasibly obtaned from natgas.