Bosch has developed a new electronic driver system for trams that not only warns tram drivers of any impending collision but will engage the brakes independently to stop the tram and avoid an accident if the driver reacts to late or not at all.

The German state of Hesse’s technical supervisory authority recently approved the electronic driver assistance system for use in public transportation. Once Frankfurt’s tram drivers have tested this guardian angel for both drivers and passengers, the first self-braking trams will go into regular service in the city.

Driver assistance systems that can warn of collisions and automatically brake in an emergency are increasingly spreading to rail transportation systems and provide the basis for automated trams. These systems are capable of supporting the tram driver in all types of driving conditions, from monotonous to challenging, day or night, rain or snow. Bosch launched the first version of its collision warning system in 2014.

If that system’s sensors detect a potential accident, it provides optical and acoustic warnings to the tram driver. The new and enhanced system takes this to another level: in the event that the tram driver cannot react to the warning in time, the system will brake the tram automatically and bring it to a complete stop. 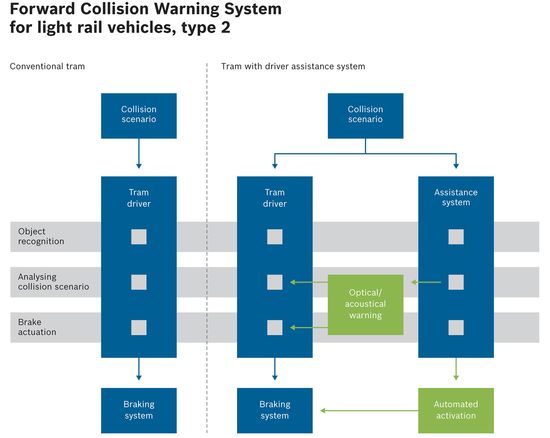 With an aperture of up to 70 degrees, the radar sensor monitors the area up to 160 meters ahead of the tram and measures the speed and distance of any cars, buses or other trams. In addition to mobile obstacles, the radar sensor detects static objects such as buffer stops.

The video sensor is the ideal complement to the radar technology because it keeps an eye on the track ahead and detects anything crossing the rails more quickly and accurately. The central rail control unit processes information from both sensors, along with other factors, such as the speed of the tram, to provide a detailed image of the environment.

If the system detects that an object is coming dangerously close, it gives the driver a visual and an acoustic warning. Should the tram driver not react to the warning signals within two seconds, the automated system slows the tram to a complete stop.

The braking action is very gentle so even passengers who are standing will not lose their balance. If necessary, drivers can also deactivate the braking operation or increase the braking power at any time, depending on how critical the situation is.

If it wasn't for the rail unions, we would have self driving trams very soon.
They could have a video system to "manage" rowdy behaviour.
+ you could get more space on them if there was no driver.

Our diesel bus drivers need that type of equipment too?

I wouldn't push the buses for a while.
Driving a bus in city traffic is a great deal more difficult than driving a tram.
So I'd keep the driver for now.
Maybe retrain the tram drivers as bus drivers to reduce the industrial relations problems. In troublesome neighborhoods, you might want to keep the drivers as protection.