New GM 10-speed auto for Camaro ZL1 shifts quicker than DCT; to be applied in 8 other models by 2018

With faster upshifts than a dual-clutch transmission (DCT) and a wider overall gear ratio spread to optimize performance and efficiency, the all-new available GM Hydra-Matic 10-speed automatic transmission sets a new performance standard in the 2017 Camaro ZL1. The transmission is an all-new design—and the first application in a car—with a wider, 7.39 overall gear ratio spread, that enables the ZL1’s supercharged engine to remain at optimal engine speeds during upshifts. GM and Ford began joint development of 9- and 10-speed transmission designs in 2013. (Earlier post.)

The wider overall ratio enables a lower numerical top gear ratio—an attribute that reduces engine speed on the highway, which contributes to greater fuel efficiency than a comparable eight-speed transmission. Improvements in spin loss complement the optimized gearing, further enhancing efficiency. Although the Camaro ZL1 will be the first GM vehicle to offer the new 10-speed automatic, designed for rear-wheel-drive applications, it will be available in eight additional vehicles by 2018. 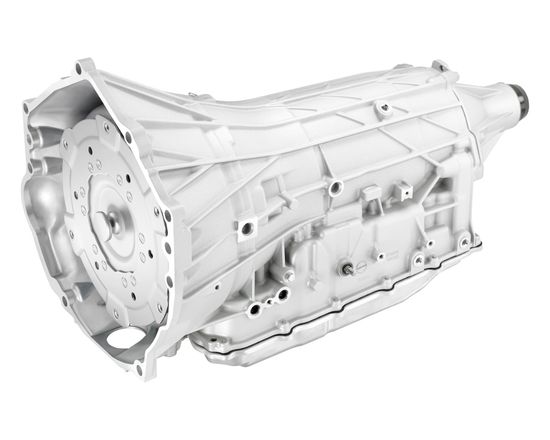 Highlights of the transmission include:

Thousands of hours of computer-aided engineering analyses were made during the development of the Hydra-Matic 10-speed transmission, driving a comparatively compact design envelope comparable to the eight-speed automatic.

The 10-speed has four simple gearsets and six clutches: two brake clutches and four rotating clutches. That’s only one more clutch than the eight-speed, despite having two more forward gears, contributing further to the compact packaging, while also improving spin losses to enhance fuel efficiency.

A unique triple-clutch assembly in the middle of the 10-speed’s architecture is a primary enabler for packaging 10-speed content in the same space as GM’s six- and eight-speed transmissions.

The 10-speed also features a variable-displacement vane pump, which optimizes transmission fluid pressure, based on speed and load, to enhance efficiency.

7.39 ratio spread and faster upshifts. The new 10-speed’s greater overall performance and efficiency are due primarily to its wider 7.39 overall gear ratio spread, which enhances off-the-line performance with a more aggressive first gear ratio than GM’s eight-speed automatic. Smaller steps between the gears also help the engine maintain the optimal speed for maximum power at almost all speeds, especially when exiting a corner on a track.

Adaptive shift controls such as Performance Algorithm Shifting and Driver Shift Control enhance performance driving. Performance Algorithm Shifting (PAS) monitors how assertively the driver is using engine output to determine at what engine speed to upshift or downshift. Driver Shift Control allows the driver to shift the transmission via the steering wheel-mounted paddle shifters. Electronic safeguards prevent over-revving if the wrong gear position is selected, but relies on the driver to make upshifts or downshifts.

Gear changes are mainly executed with clutch-to-clutch action, where an “on-coming” clutch is engaged and an “off-going” clutch is released in a precise manner to achieve the ratio change. Certain key shifts, however, are made with a freewheeling action, such as 3-1 downshifts, where a plate clutch is actively disengaged while a mechanical freewheeler clutch automatically engages with optimum synchronization.

The torque converter is 260mm in diameter and features a lock-up clutch. It also uses electronic controlled capacity clutch (ECCC) technology, which employs a small, regulated amount of slip to dampen out engine pulses for a smoother running drivetrain, especially during shifting.

Well, I would give them credit for an amazing job of engineering and it probably helps with fuel economy although that is not what the car was primarily designed for.

An impressive feat ... I would like to see spin-loss comparisons to robotized manual transmission designs as well as the older conventional transmissions.

I can still remember when I had a car with a transmission, but it has been several years now. Jerk-o-matic, I think that is what we called it. Nice piece of museum technology in the 21st century.

KiwiME, that information is proprietary, but these new transmissions are certainly being designed with a view towards minimizing internal friction. This transmission has 6 internal clutches and only two of them are open (disengaged) at a time - it's the disengaged clutches that have relative velocity between the clutch plates and that's a source of loss; the engaged clutches have no slippage and therefore no loss. In addition this transmission has other features designed to reduce oil-churning and oil-pumping losses (mentioned in the article); it ought to be equal or better than the ZF 8-speed which is already very good. The close ratio spacing allows the torque converter to be locked up a greater percentage of the time, and that's the big source of losses with normal automatics. I would expect this transmission to have pretty comparable (and high) mechanical efficiency to the various DCT or manual transmissions, better than any CVT, and certainly better than old-style automatics (that had ratios too far apart to allow torque converter lockup except in top gear).

Disclaimer; one of my customers will be making parts for these, which is how I know a thing or two about them (they are making pre-production parts now).

The article doesn't mention it but this is a Ford and GM co-developed transmission with Ford leading on this one (GM is leading an upcoming new front-drive transmission). The initial applications will be in high performance vehicles to showcase its capabilities (Ford Raptor, Camaro ZL1) but this transmission eventually will be coming to F150s and Silverados everywhere, replacing the Ford and GM rear-drive 6-speed transmissions, and that's when the big production volume hits.