For this application, Bosch motorsport engineers developed a new boost recuperation system (BRS), the first generation of which will go into production at the company starting in 2017. The electrical components of the BRS support the internal-combustion motor in compact vehicles with up to 10 kW of additional power, which reduces fuel consumption and CO2 emissions by up to 15% on the street. It also provides the internal combustion engine with an additional 150 N·m (111 lb-ft) of torque during acceleration.

We have modified the system for use in professional karting, and we are using it it to electrically power the e-kart prototype. We offer a complete system combining Bosch automotive large-scale production technology with specially developed components and powertrain control software from a single source.

Two starter-generators delivering a total output of 20 kW form the basis of the new powertrain, which sends 300 N·m of torque to the rear axle. Energy is stored in the system using a 48-volt lithium battery. In addition, the starter-generators can recover energy during recuperation and then use it for acceleration.

The nerve center of the powertrain is a custom ECU that controls energy flows throughout the kart. A set of sensors and a wiring harness complete the overall system.

The new electric powertrain turns the Mach 1 Kart chassis into a clean, fast, and agile performer on the race track. 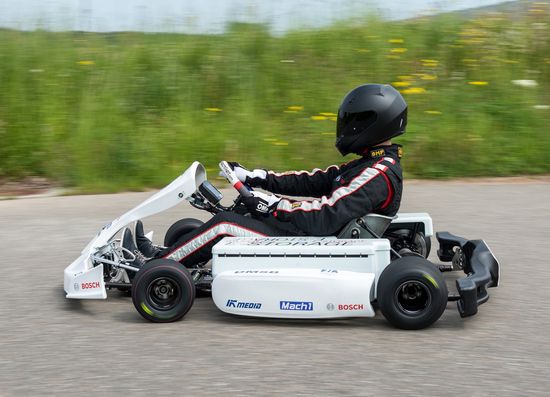 Even during its initial run, the electric kart was able to hit 100 km/h in less than five seconds and achieve a top speed of over 130 km/h. Over the coming weeks and months we will continue testing to further explore the capabilities of the new e-kart.

Karting is considered the gateway series into the world of professional motorsport. Currently, most racing karts are powered by internal combustion engines. When the FIA, DMSB, Mach 1 Kart, and Bosch decided to develop an all-new electric powertrain for professional karting, they began with a blank sheet of paper. The idea was to create a purely electric motorsport discipline that made no compromises in power or performance.

With more than 100 associates around the world, Bosch Motorsport has been a part of Bosch Engineering, a subsidiary specializing in engineering services, since 2003. Bosch Motorsport engineers equip teams running in the DTM, FIA European Formula 3 Championship, the Porsche Carrera Cup Germany, and numerous rallies and long-distance championships—including the 24 Hours of Le Mans event. Bosch’s involvement in motor racing dates back 115 years: the first racing victories with Bosch technology on board came in the early 1900s.