In a new report, Navigant Research forecasts that plug-in electric vehicle (PEV) sales in the US and Canada in 2016 will near 200,000 unit sales, growing by around 62% year-over-year. Navigant further expects significant growth in the North American PEV market over the next few years.

In 2016, Navigant Research expects growth to come from expanding sales of the Tesla Model X and the second-generation Volt, as well as the introduction of the Chevrolet Bolt 200-mile range battery electric vehicle (BEV), the Prius Prime PHEV, the Chrysler Pacifica PHEV, and the Mitsubishi Outlander PHEV later in the year.

Looking further ahead, Navigant Research estimates that the introduction of the Tesla Model 3 in late 2017 will likely boost the market by about 60% in 2017 and then nearly double the market in 2018 as the first full year of Model 3 sales is achieved. After 2018, strong but stable growth is expected with a compound annual growth rate from 2018 to 2025 in the base scenario of nearly 13%.

Since the PEV market launched in 2011, sales have been concentrated on the US West Coast, with PEV market share in California expected to exceed 5% in 2016. However, a group of eight Northeastern states is likely to see PEV sales increase considerably as automakers stress BEV deployments and marketing efforts to comply with the region’s mandates for PEV production. 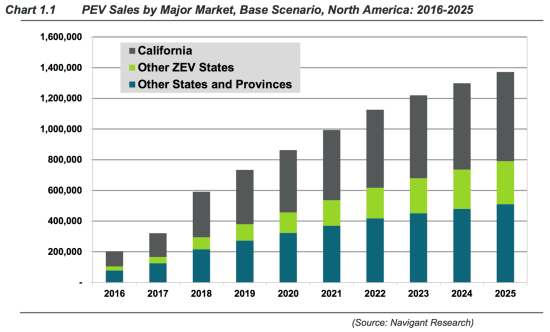 Outside of the zero emissions vehicle (ZEV) states, PEV sales are expected to grow most quickly in states with desirable PEV incentives, low vehicle capability and range requirements, and positive demographic characteristics toward PEVs. Hawaii and Washington are likely to maintain the significant market growth both states witnessed over the last 5 years, according to Navigant.

The long-range BEV under $40,000 is a marked achievement in the industry. This development is expected to significantly increase PEV adoption past the 1 percent penetration rate it has struggled to surpass in all but a few markets.

According to the report, PEV preferences vary significantly by US region, and consumers in the Northeast appear to demand significantly higher vehicle capabilities and range requirements.

However, it also confirms that people in colder North East regions demand more performance and more range. It will come in 2020+ with improved batteries and FCs.