Nine years after the launch of the mid-size A5, Audi unveiled the second-generation A5 and S5 Coupé during an event at the company’s headquarters in Ingolstadt. The new Audi A5 Coupé will launch in Germany with five engines: two gasoline TFSI and three diesel TDI units.

Their power output has increased considerably and is now between 140 kW (190 hp) and 210 kW (286 hp). Compared with the previous model, they offer up to 17% more performance while consuming as much as 22% less fuel. All the engines combine high efficiency with sporty power development and smooth running—especially the two 3.0 TDI six-cylinder engines. 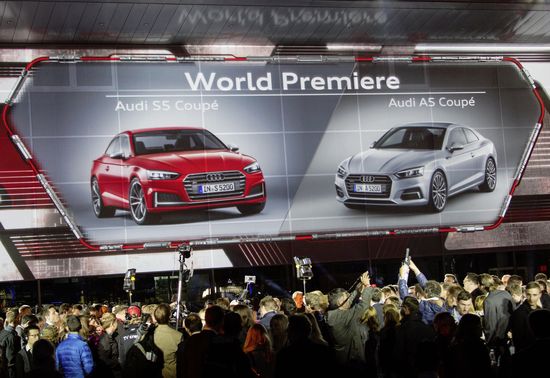 The new Audi A5 Coupé comes with a drivetrain solution tailor-made for each engine variant. The manual six-speed gearbox and the seven-speed S tronic are used with the four-cylinder engines as well as the 160 kW (218 hp) 3.0 TDI with front- or all-wheel drive. The eight-speed tiptronic is reserved for the top diesel with 210 kW (286 hp) and the S5 engine. Both engines come standard with quattro all-wheel drive. Audi also offers the optional rear-axle sport differential for even more dynamic driving and precision.

The new quattro with ultra technology is also available for the first time. At the moment it can be combined with the four-cylinder TFSI and TDI engines with manual transmission. Optimized for efficiency, the drive system does not exhibit any perceptible differences to permanent systems in terms of traction and driving dynamics.

The all-new chassis is among the strengths of the Audi A5 Coupé; Audi offers a suspension with damper control as an option. This is integrated into the dynamic handling system known as Audi drive select, which enables the driver to modify the basic characteristic in multiple steps.

The electromechanical power steering is also a new development from Audi. It adapts according to the vehicle’s current speed and provides highly precise road feedback. Optionally available is the dynamic steering, which varies its gear ratio depending on the speed and steering angle.

The Audi A5 Coupé is significantly more efficient than its predecessor. This is due in large part to a reduction in weight as well as sophisticated aerodynamics. The engineers were able to trim the curb weight by as much as 60 kilograms (132.3 lb). The body is the lightest in the competitive field thanks to an intelligent mix of materials and lightweight design. With a drag coefficient of 0.25, the A5 Coupé is also the segment leader with respect to aerodynamics.

The A5 Coupé is now available for the first time with the optional Audi virtual cockpit, a 12.3-inch TFT display with a resolution of 1,440 x 540 pixels. Together with the MMI navigation plus including 8.3-inch monitor on the center console, it forms the central information unit.

The focal point of the MMI terminal is the round rotary pushbutton. Its surface is home to the touch-sensitive touchpad. The touchpad is used to input characters and also for multifinger gestures, enabling the driver to zoom in on the map, for example. The whole MMI control logic is similar to that of a smartphone, including the intelligent free text search function. The new, more natural voice control system can recognize input made using everyday language, such as: “I would like to call Peter.”

Customers choosing MMI navigation plus automatically also get the hardware module Audi connect and the new Audi connect SIM, a SIM card permanently installed in the car. The new Audi A5 Coupé uses this to connect to the Internet via the ultrafast LTE network. Use of the versatile Audi connect services is free of charge of three years, both in Germany and in most European countries. The respective national provider is selected automatically as needed.

The A5 can also be equipped with the optional Audi connect safety & service package. This includes such functions as an automatic emergency call in the event of an accident, online roadside assistance and Audi service request as well as remote functions that can be used with the MMI connect app on a smartphone, smartwatch or—in conjunction with the fourth generation Apple TV—from a television. Examples include locking and unlocking the car, checking where the car is parked and calling up the vehicle status.

With the Audi smartphone interface, Apple Car Play and Android Auto bring the familiar smartphone environment to the car, if desired. The optional Audi phone box with wireless charging in the center armrest uses near-field coupling to link smartphones wirelessly to the vehicle’s antenna and enables inductive charging according to the Qi standard.

Driver assistance systems.. An intelligent combination of different technologies enhances the safety, comfort and efficiency of the new Audi A5 Coupé. At the same time, Audi is also taking the next step toward piloted driving. The broad choice of innovative driver assistance systems sets standards in the segment. Compared with the previous model, nearly all of the systems are either completely new or have been extensively updated.

The new Audi A5 Coupé will launch in Germany and additional European countries in fall 2016.