UMTRI: average new vehicle fuel economy in US in May up 0.2 mpg from April

Average fuel economy (window-sticker value) of new vehicles sold in the US in May 2016 was 25.4 mpg (9.26 l/100 km)—up 0.2 mpg from the value for April 2016, according to the latest monthly report from Dr. Michael Sivak and Brandon Schoettle at University of Michigan Transportation Research Institute (UMTRI). This improvement likely reflects the increased price of gasoline in May, and the consequent increased interest in more fuel-efficient vehicles by buyers of all vehicle classes, they suggested. 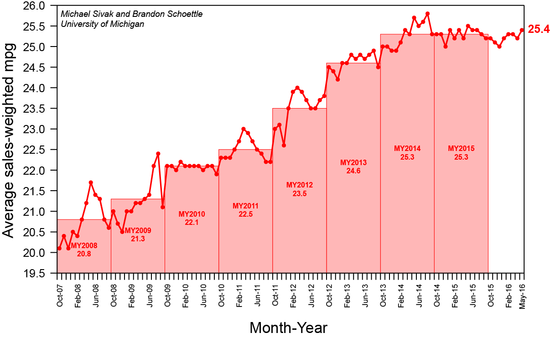 The University of Michigan Eco-Driving Index (EDI)—an index that estimates the average monthly emissions of greenhouse gases generated by an individual US driver—was 0.84 in March 2016, up 0.03 from the value for February 2016 (the lower the value the better). This value indicates that the average new-vehicle driver produced 16% lower emissions in March 2016 than in October 2007, but 6% higher emissions than the record low reached in both August 2014 and August 2015. 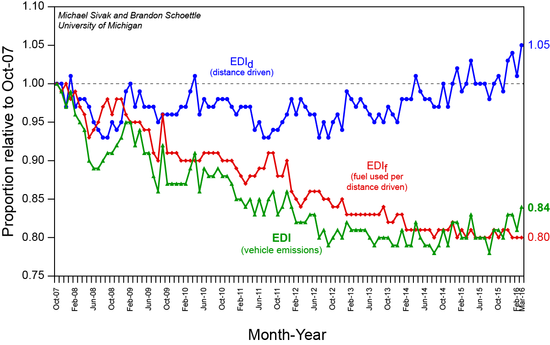 What will happen to CAFE if this trend last another few years?

The regulations are footprint based targets, and improvements in vehicles will continue. The OEMs will need to meet the targets on an OEM ensemble-fleet basis. Some will purchase credit from others, but this only goes so far. The standards will keep "forcing the issue" and what is offered for sale will keep changing towards higher fuel economy models. It will not be a slow process if the regulations remain unaltered.

I don't think anyone goes out and buys a worse performing car because gas is cheap on principle.

Gasoline use is largely fixed... gas could go back north of $3.30 tomorrow, and consumption might drop <5%. Its like electricity or any other "essential".

sure high prices can lead to some conservation... but I think mpgJuan said it well... OEMs have to meet standards in order to sell vehicles. So by default there won't be any other way but up with a few dips here and there.

the US economy needs consumer independence and mobility to function well. Workers need a cheap / efficient / available way to get to work.

Owning and operating your own vehicle allows for that currently, and there aren't many other options for a vast majority of the population.

implementing vice taxes on a necessity for most employment would be diabolical.

I think gasoline will stabilize out to <~$3 whole sale in the long run till its eventual legislative demise. There are many breakthroughs for waste to fuels and other "green" technology that will displace petroleum from the ground.