SAKOR Technologies has supplied a belt noise test stand to Ford Motor Company, which the company will use to meet new SAE specifications for belt noise in vehicle Front End Accessory Drive (FEAD) applications, as well as other noise testing requirements. 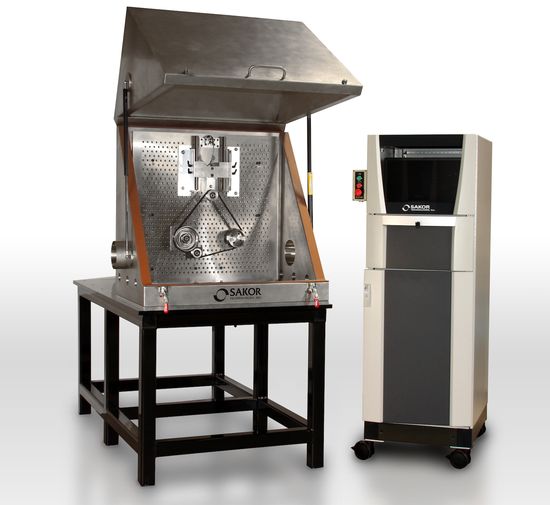 The new belt noise test stand uses a high-speed AC dynamometer system to simulate the engine, allowing testing to be performed in a clean laboratory environment without the need for the fuel, cooling, and fire suppression systems necessary for fired-engine testing.

The dynamometer precisely simulates the torque pulses from engine firing, which are critical for this type of noise testing. The test stand also includes a thermal chamber as well as a water mist system to simulate a wide range of environmental conditions which are also known to have a major effect on belt noise performance.

Beyond the SAE J2432-2012 testing, the unit is also capable of creating misalignment and/or tilt to the pulleys, which can also be major contributors to engine belt noise. This allows Ford to test new formulations of rubber, new fibrous materials, or new pulley and belt shapes designed to minimize belt chirp under a wide range of environmental conditions.

According to Scott Willis, FEAD Technical Specialist at Ford, the belt test system can be used for testing belts of any length or width, and was designed to have test capabilities over and above what is required in the SAE specification. The test stand can be used for testing both axial and angular belt misalignment and performing belt aging and durability testing. Willis leads SAE’s Belt Drive (Automotive) Systems Committee.