NASA will test new propulsion technology using an experimental airplane now designated the X-57 and nicknamed “Maxwell.” The X-57 features 14 electric motors turning propellers, all of them integrated into a uniquely-designed wing. NASA researchers ultimately envision a nine-passenger aircraft with a 500 kW power system in 2019.

NASA Administrator Charles Bolden highlighted the agency’s first X-plane designation in a decade during his keynote speech Friday in Washington at the American Institute of Aeronautics and Astronautics (AIAA) annual Aviation and Aeronautics Forum and Exposition, commonly called Aviation 2016.

With the return of piloted X-planes to NASA’s research capabilities—which is a key part of our 10-year-long New Aviation Horizons initiative—the general aviation-sized X-57 will take the first step in opening a new era of aviation.

As many as five larger transport-scale X-planes also are planned as part of the initiative. Its goals—like the X-57—include demonstrating advanced technologies to reduce fuel use, emissions and noise, and thus accelerate their introduction to the marketplace.

The X-57 number designation was assigned by the US Air Force, which manages the history-making process, following a request from NASA. The first X-plane was the X-1, which in 1947 became the first airplane to fly faster than the speed of sound.

Dozens of X-planes of all shapes, sizes and purposes have since followed—all of them contributing to our stature as the world’s leader in aviation and space technology. Planes like the X-57, and the others to come, will help us maintain that role.

An advantage of modifying an existing aircraft is engineers will be able to compare the performance of the proposed experimental airplane with the original configuration, said Sean Clarke, SCEPTOR co-principal investigator at NASA’s Armstrong Flight Research Center in California. The Tecnam, currently under construction, is expected to be at Armstrong in about a year for integration of the wing with the fuselage. Armstrong flew a different Tecnam P2006T in September to gather performance data on the original configuration.

The original wing and two gas-fueled piston engines will be replaced with a long, skinny wing embedded with 14 electric motors—12 on the leading edge for takeoffs and landings, and one larger motor on each wing tip for use while at cruise altitude.

NASA’s aeronautical innovators hope to validate the idea that distributing electric power across a number of motors integrated with an aircraft in this way will result in a five-time reduction in the energy required for a private plane to cruise at 175 mph. 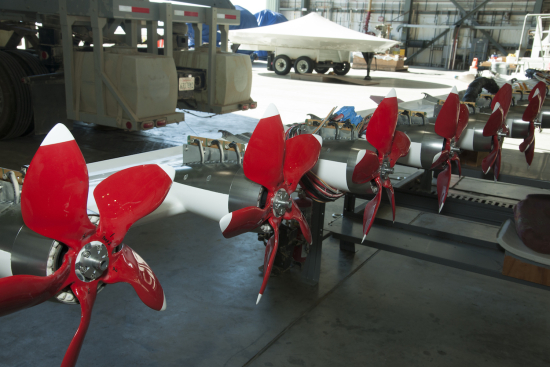 Several other benefits would result as well. “Maxwell” will be powered only by batteries, eliminating carbon emissions and demonstrating how demand would shrink for lead-based aviation fuel still in use by general aviation.

Energy efficiency at cruise altitude using X-57 technology could benefit travelers by reducing flight times, fuel usage, as well as reducing overall operational costs for small aircraft by as much as 40%. Typically, to get the best fuel efficiency an airplane has to fly slower than it is able. Electric propulsion essentially eliminates the penalty for cruising at higher speeds.

The X-57’s electric propulsion technology is also expected to significantly decrease aircraft noise, making it less annoying to the public.

If Nissan manage to make their ethanol fuel cell configuration work that might provide the power for electric planes at good enough weight for bigger aircraft and longer range too.

Go NASA! This is exactly what NASA should be doing, building new, crazy machines that push the bounderies. I only wish they had more money. That it will take a year to launch with the new wing and engines seems too slow.

Anyway - let's not forget Mars NASA. Don't let Tesla beat you to it. I want to visit there in my lifetime..

As the article says, if the efficiencies of this design work out they should be able to power light aircraft carrying 9 people just using batteries.

I was suggesting that ethanol might allow larger longer distance aircraft carrying perhaps ten times as many people over 1,500 miles or so.

Still not the transatlantic jumbos, but many aircraft short of that.

Add solar panels along wings and lessen the weight of batteries, with 40% efficient cells and ultracaps , there will be enough energy for take off.

Many times 9 passengers and more range could become a reality for regional flights in 20 to 30 years but bio-ethanol FCs + props + airframes have to be further developed.

Not so sure that NASA is the right place to do it.

hey Nasa , use two stage launch and drop half your crusing weight. build a booster stage with ultracaps ,super high power density . build a compact turbofan module the jettisons after take off and lands itself back at base.
Eventually to get to the thrust weight ratio to reach speed of sound the rocket scientist need use Nikola Tesla's technology to get compact electric thrust turbofan blowing 10,000 lbs of thrust. In computer world we do something similar for cooling in 1 u rack servers.

well if do go to SOFC for power plant the waste heat from the 800'C cells could be used as an afterburner effect on the turbo fan dishcharge. This would be future tech though the balance of system for SOFC has to be reduced and made more efficient.

The waste heat would be of better use for deicing of the wing and empenage. Take my word, flying in the Northeast during winter months without deice is a crap shoot.