BMW of North America won its bid to supply the Los Angeles Police Department with 100 battery-electric BMW i3 vehicles for use in the department’s transportation fleet. (Earlier post.) Los Angeles currently has a 50% EV procurement guideline for all new light duty fleet vehicles, which will go to 80% by 2025 as called for in the Los Angeles Sustainable City pLAn.

The announcement comes after a field trial during which a BMW i3 was evaluated alongside other EVs on the streets of Los Angeles as part of the LAPD’s every day fleet. Ultimately, the BMW i3 was selected due to a combination of EPA rated best-in-class efficiency, reliability and state-of-the-art ConnectedDrive services, which can be used to support fleet management applications. BMW’s knowledge of charging infrastructure and the availability of a large network of BMW i centers for servicing the fleet in a convenient and cost effective way also played into the decision, the company said. 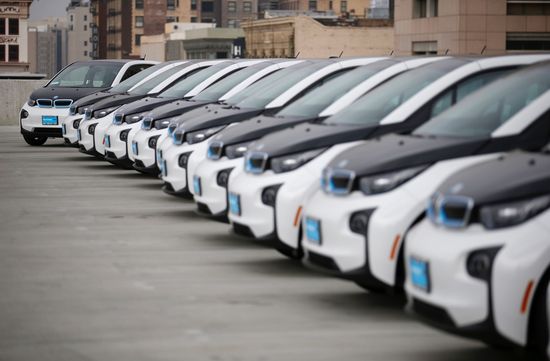 The BMW i3 police cars began hitting the streets of Los Angeles this spring badged with an LAPD insignia. As the department’s non-emergency fleet vehicles, the BMW i3s will be used throughout the department as transportation vehicles for officers and in community outreach initiatives.

Due in large part to its compact size and use of light-weight Carbon Fiber Reinforced Plastic (CFRP) in its construction, the sustainable, fully-electric BMW i3 has a tight turning radius and the agility needed to navigating congested city streets.

The BMW i3 is the first purpose-built electric production vehicle to be made primarily of Carbon Fiber Reinforced Plastic (CFRP). With 170 horsepower and 184 lb-ft of torque hybrid-synchronous electric motor, the fully electric BMW i3 is electrified by a 22-kWh lithium-ion battery, good for 80-100 miles of emission-free driving and has been rated the most fuel efficient EPA-certified vehicle by the US Department of Energy. Agile and engaging to drive, the BMW i3 is ideally suited for dense urban areas.

The BMW i3 has a base MSRP of $42,400 and the range-extender model starts at $46,250, before any federal or applicable state incentives.