LiquidPiston, Inc. (LPI), the developer of engines based on its High Efficiency Hybrid Cycle (HEHC) (earlier post), has released a proof-of-concept video of its X Mini rotary engine applied in a go-kart.

LiquidPiston’s X Engine architecture is a non-Wankel rotary embodiment of the HEHC. The X Engine has few parts and three combustion events per rotor revolution, resulting in tremendous power density. The X Engine’s few moving parts consist of a rotor (the primary work-producing component) and an eccentric shaft. Except for ancillary parts such as injectors, fuel pumps, and oil pumps, there are no other moving parts.

LiquidPiston’s HEHC combines the advantages of Diesel, Otto and Atkinson cycles. The cycle elements include: 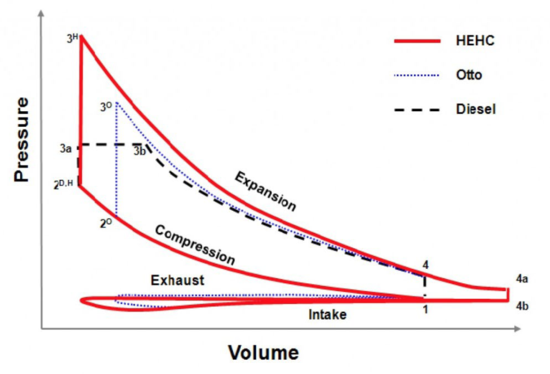 To demonstrate the viability of the engine, the LiquidPiston team removed the go-kart’s traditional 39-pound engine, replacing it with the four-pound X Mini. Concurrent with the release of the video, LiquidPiston is allowing interested parties to place orders for the X Mini dev kit.

Would this be a nice range extender ?
I wonder what type of exhaust conditioning it requires.
I imagine they don't care very much on go-carts.

Light weight is interesting. Resembles turbine engine cycle made with pistons. Turbines use much air for cooling. Yes range extender, but all automobiles need to be hybrid to save the energy from slowing and braking to a stop. Artemis digital seems to be the lightest weight efficient hybrid technology. Only 10 kilowatts are needed for high speed travel on level road for many passenger automobiles. ..HG..