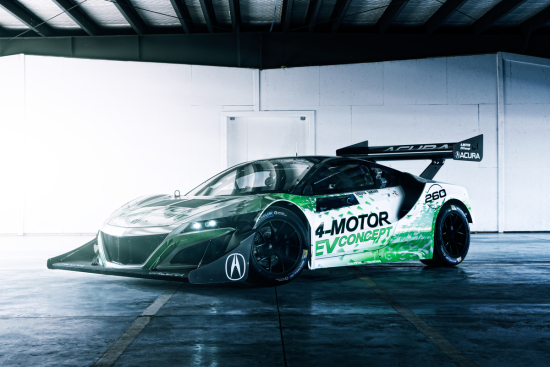 The production SH-AWD is a three-motor hybrid system designed for a sports car and offers high power, lightweight and high response, with high cooling performance for high-load operation such as circuit driving.

The three-motor SH-AWD system features a midship-mounted V6 twin-turbo engine; the direct drive motor of a hybrid system mounted directly on the engine; and a 9-speed dual-clutch transmission (DCT). The front wheels are driven by a twin-motor unit (TMU).

The E-Drive system uses the three motors to enhance cornering performance by torque vectoring and front/rear traction force allocation. Direct acceleration response is achieved by a constant assist according to the accelerator position (AP) utilizing the twin-motor unit (TMU) and compensating lack of low speed torque of the turbocharged engine with the direct drive motor and the high-power battery.

The SH-AWD TMU consists of two independent motors, planetary gear sets and a brake. The TMU can freely allocate the right/left torque in any speed region.

Honda R&D has been developing “super handling” technology for more than 20 years in the pursuit of ideal vehicle handling. By applying separate Twin Motor Units (TMUs), the brains of Sport Hybrid SH-AWD, on each axle in the new EV Concept, Acura is enabling independent torque vectoring to all four corners. Based upon the learnings from last year’s race, the team updated the system management of the powertrain for more precise thrust at each wheel.

Acura NSX EV Drivetrain is more Powerful and advance than the Tesla and Porsche Mission E
The all new 2016 Acura NSX 4 Motor EV Concept will be the game changer in the EV class vehicles.