BMW i announced a home stationary energy storage system solution integrating its BMW i3 vehicle battery at EVS 29 in Montréal.

The system utilizes BMW i3 high-voltage batteries and can be expanded to incorporate second-life batteries as they become available in the market. This strategy will extend the useful life of the battery for the owner, even beyond in-vehicle use, BMW said. 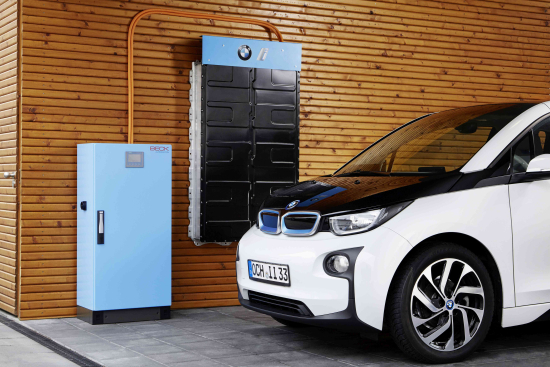 The remarkable advantage for BMW customers in using BMW i3 batteries as a plug and play storage application is the ability to tap into an alternative resource for residential and commercial backup power, thus using renewable energy much more efficiently, and enabling additional revenues from the energy market.

The concept announced at EVS29 is the first market-ready home storage system using a second-life automotive BMW i3 high-voltage battery integrated by BECK Automation (Würzburg, Germany). The battery storage system electrified by BMW i can be equipped with new or second-life batteries.

The battery storage system also includes a voltage converter and power electronics to manage the energy flow between renewable energy sources, the house interface, and the Li-Ion high-voltage battery from the BMW i3.

The system has been designed to be integrated into the house energy supply chain. The battery storage system electrified by BMW i is sized so it can be placed in the basement or the garage of a detached house, where the stored energy can either be used for electrically-operated devices in the home or for charging the battery of an electric car.

Utilizing real-time energy readings, the system can measure the available energy supply and demand, making the necessary calculations to determine the optimal time to charge or discharge the system. This approach minimizes energy waste, effectively reducing energy costs on a day-to-day basis.

This system can enable energy produced from solar panels to be used more efficiently. It can be charged during the day, taking advantage of the energy that may otherwise be underutilized while customers are typically away, to support the overall energy efficiency of their home.

Typical daily household energy usage in the US is between 15-30 kWh; the battery storage system electrified by BMW i with its 22 kWh or 33kWh capacity is suited to operate a variety of appliances and entertainment devices for up to 24 hours on its own.

Because the electric draw is much less at home when compared to automotive usage, this storage system is an ideal application for a retired BMW i3 battery; the repurposed battery will offer many additional years of service.

The “plug and play” nature of the BMW i3 battery application in this system is a key element in its design. Following in-vehicle usage, the BMW i3 battery retains most of its original capacity, thus continuing to offer years of emissions free power storage and expanding the sustainability concept beyond the individual vehicle life.

BMW i has worked with universities, national laboratories, utilities and industry partners to maximize residential energy efficiency. The high-voltage batteries developed for the BMW i3 have already demonstrated their high potential for secondary use as a stationary power storage in numerous research projects. Long before the launch of the BMW i3, it was clear that the batteries would have an exceptionally long life and could serve a useful purpose in enabling electric driving both within and outside of the vehicle.

In 2011, batteries which were previously used in the MINI E test fleet were successfully implemented in a stationary project. Together with the Federal Ministry of transport in Berlin, the project demonstrated that an energy positive home environment with a battery system is possible.

In 2013, BMW and the University of San Diego installed a micro grid application with Battery 2nd Life MINI E batteries. In 2014, BMW integrated high-voltage batteries into a stationary storage system in Hamburg. This project serves the energy supplier Vattenfall as a power buffer for fast charging stations, aiding by storing solar power and helping to stabilize the electric grid.

In 2015, NextEra, the leading American energy producer and distributor of clean energy, signed the largest contract in automotive history for the delivery of 20 MWh of Battery 2nd Life automotive batteries. These batteries were sourced from the BMW ActiveE test fleet in the US and from early BMW i3 vehicles. NextEra will operate them in various industrial sized stationary electricity storage systems.

BMW i 360° Electric. The battery storage system adds to BMW i 360° Electric, an array of lifestyle offerings designed to optimize convenience and sustainability of the e-mobility lifestyle for BMW i and iPerformance customers. BMW i 360º Electric encompasses products for home and public charging, assistance services, and flexible mobility.

ChargeForward. BMW is conducting a pilot study into the relationship between home electric vehicle (EV) charging and the energy grid, together with Pacific Gas and Electric Company (PG&E), whose service area covers Northern and Central California.

Working with a group of nearly 100 BMW i3 drivers in the San Francisco Bay Area, BMW i ChargeForward is demonstrating how intelligent management of EV charging can contribute to optimizing electric power grid efficiency, and thus is expected to reduce total cost of electric vehicle ownership.

The study has two parts: a managed charge pilot program involving BMW i3 owners and a Battery 2nd Life energy storage system. In the managed charge pilot program, these BMW i3 owners allow BMW to delay or interrupt the charging of their vehicles by up to an hour, based on requests received from PG&E when grid loads are at their peak. The program also includes a “second life” for used MINI E batteries, by repurposing these batteries into a stationary solar-powered electric storage system located at the BMW Group Technology Office in Mountain View, California.