Sweden inaugurated a test stretch of electric road on the E16 in Sandviken, thus becoming one of the first countries to conduct tests with electric power for heavy transports on public roads.

The test stretch on the E16 is two kilometers long. The technology is similar to light rail, with contact lines 5.4 meters over the roadway. The truck has a pantograph on the roof that feeds 750 VDC to the truck’s hybrid electric system. The current conductor can connect automatically at speeds up to 90 km/h (56 mph). The test stretch is equipped with posts 60 meters apart that hold up the electric lines over one of the lanes. 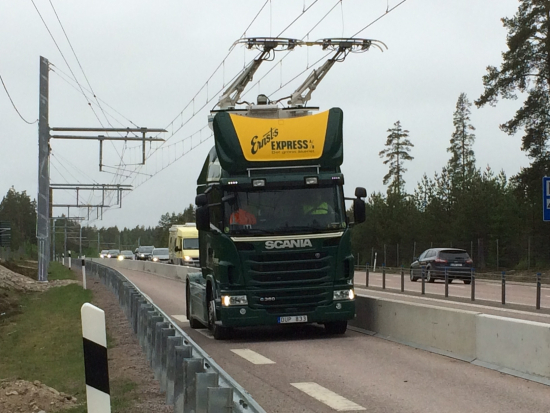 At a rest area, there is a transformer for low-voltage direct current of the same type as in the light rail network. Other traffic on the road will not be affected.

Electric roads will bring us one step closer to fossil fuel-free transports, and has the potential to achieve zero carbon dioxide emissions. This is one way of developing environmentally smart transports in the existing road network. It could be a good supplement to today's road and rail network.

An electrified road is one in which the electricity supply for vehicle propulsion is continuously supplied in order to keep the vehicle moving and to avoid recharging requirements. There are three possible techniques known today:

The technologies for electric roads have developed rapidly over the last few years, and are now mature enough that some of them can be tested. Last year, the Swedish Transport Administration, in consultation with Vinnova and the Swedish Energy Agency, decided to give support to two test facilities. The two systems differ as to how electric power is transferred to the heavy vehicles.

The tests will continue up through 2018. They will provide knowledge of how electric roads work in practice, and whether the technology can be used in the future. The experiment is based on the Government’s goal of energy efficiency and a fossil fuel-free vehicle fleet by 2030, and will contribute to strengthening Sweden’s competitiveness.

Three government agencies are partially funding the project, and the participants are paying for the rest of the funding:

Not a very graceful solution and would require loads of energy on busy e-truck lanes?

Trucks with various FC-PHEVs technologies may eventually be a better solution?

If the goal is to have long distance heavy trucking without using an internal combustion engine, this is what probably makes the most sense unless Lithium Air becomes real and even then this might be better but it will not be inexpensive. With enough battery to get the first and last few miles (kilometers), only the main highways need to be wired. In cases where the distance is long enough, it would be better to ship containers by rail.

HarveyD -- This is considerably more efficient than hydrogen fuel cells, so it would require less energy and with hills, the downhill traffic would feed power back into the system to help with the uphill traffic.

Onboard batteries/super caps, associated with battery and/or FC e-trucks can recover braking/decelerating energy.

Agree with you that hauling truck trailers with e-trains may be more convenient?

Might be a good intermediate solution until Hyperloop Freight comes along.

This is the answer to electrified trains.  Trains as such take too long to assemble, travel and deliver their cargo.  An electrified lane of road powers trucks on their individual routes, while moving the carbon consumption elsewhere (or eliminating it).

Possibly the solution is roads like this with self-driving trucks which operate mostly at night.  They run when humans are off work, and park at yards near their destinations.  Human drivers take them to their final destinations on battery power and handle the loading and unloading, then return them to the network where they go to their next stop by themselves.

There won't be many truck drivers in the future, but they'll all be home in their own beds every night.

A simpler and cheaper variant, using single e-lane which includes the both polarities was proposed few times ago. Please see
http://www.hybrid-engine-hope.com/hybrid_transport_system
In this case the used pantographs are of a common type and the truck can have a larger steering freedom when is connected with the e-lane (the driver can be more relaxed). On the other hand the e-lines can be protected better for bad weather (icing , snow, strong winds, etc.) and the maintenance is simpler.

I think you are off about the savings... with your numbers it should be closer to almost $30 an hour... Maybe more. Robots don't collect wages/health care pay taxes.They'd also likely crash less (possibly).

I think this idea could be a good one, but maybe if there was a national/global standard...

you cant start with 750v and later change it to 1000v... It has to be done all at once, the infrastructure would have to change on everything utilizing it.

But I think if you could get the charge rate to about 100-1000x the use rate, the coverage you'd need would be smaller.

Like if you had a one mile run every 60 miles or so on the KTag(an example) or what have you, I think it would be better than having endless miles of wires.

Charge up to near capacity and run down till the next set of wires...

Trucks would only need to be 200mile range for charge, 320kwh could do that (which could be affordable)

the question would be for my idea, is 1000v @ 300-500amp possible for a energy sink like a battery? I guess you could double the span and halve the amperage...

Electronics do whatever voltage conversions are required.  Recent models of the Prius have a DC-DC converter between the inverters and the battery.

Charging a BEV in motion rather than having a continuous power feed is one way to slash capital cost.  I like it.

How many trucks can be in a bumper to bumper 2 miles though? I feel like this could work, but some smart metering might have to come into play.

I really feel that this would have to be the solution actually get BEV trucks... charging while in motion. If end to end trips were made with battery only we'd need almost a 1Mwh battery. this could make it 1/3 or 1/4 that capacity, (making it viable)

How many trucks can be in a bumper to bumper 2 miles though?

Let's see, what's the length limit?  Say 100 feet per truck, so maybe 104 of them.  Thing is, if they're that close together they will be moving slowly (unless "platooning").  If they're in line long enough, the batteries will top off before they reach the end and power demand will drop.

Such fast charging requires batteries specialized for that trait; energy density will be lower.

If you have continuous power over one road lane, you can use higher-capacity but slower-charging batteries and probably less of them.  The cost tradeoff depends on density of vehicles on the road; the more heavily the overheads are used, the more it makes sense to put the money into infrastructure for cheaper vehicles.

Don't get me wrong, I'm all for getting further away from fossil fuel combustion ... but ... I find this kind of oxymoron to go all Electric thinking it's green because it has 0 emission.

It's nice and handy for showing off in the news but there is a whole "ecosystem" behind it that is unfortunately unknown.

It's nice to migrate 95% of your energy consumption toward electrical energy but how are you going to produce that extra energy?

By burning 95% more nuclear rods? Installing 95% more windmill which will use steel and components that perhaps were themselves are made through a bi-product of burning coal in less restrictive countries because they are cheaper to manufacture?

What's the point to switch to Electrical systems if you're going to create more nuclear waste to compensate. Where are you doing to store that waste. Burning more oil? coal? More fracking for natural gaz and then increasing the potential for underground water source pollution? More dams which themselves will lower water flow from rivers increasing farming pollution due to fertilisation concentration, bi-product of irrigation...

The only way out is to reduce consumption and limit transport of goods or means of transportation which will most likely never happen...

There is no way out of the increasing needs for energy...

Hopefully we can find answers before it's too late.

Okay, that was weird; comment disappeared.  Apparently the words "doom p*rn" trigger something.

We had 60 to 80 e-city buses with the same arrangement in the late 1950s and early 1960s. People did not like the overhead cables and drivers experienced connection-contact problems during icy conditions in winter times.

All those early (direct connect) e-buses were sold to Vancouver, where they were used for another 10 years or so.

Next generation city buses will be 100% electric

For long distances, priority should be given to passenger and freight e-trains in USA and Canada to catch up with China, EU, Japan and So-Korea?

These trucks have no traction battery. They don't charge from the wire.
When the electric contact is lost, the diesel engine kicks in instantly

Trolleybuses used to have big problems when electric contact was lost, but that's not the case for these trucks.

The city buses in Akron Ohio used the same basic system system when I lived there as a child in 1953. The fireworks that resulted when the buses crossed the power grids in intersections was always fascinating to me and the other 4 year olds.

Reposting the comment that disappeared, with a slight edit:

It's nice to migrate 95% of your energy consumption toward electrical energy but how are you going to produce that extra energy?

Here's one way.  Here's another way.

Do you realize that humanity's entire energy consumption from ALL sources can be met by fission of just 5000 tons of uranium per year?  Meanwhile, rivers deliver another 32,000 tons of it to the oceans every year, adding to the 2+ billion tons already there.  It's a highly sustainable resource.


What's the point to switch to Electrical systems if you're going to create more nuclear waste to compensate.

This may not be a familiar concept to you, but radioactive substances disappear all by themselves.  Radioactivity is the process of releasing energy as they convert to stable states.  Hold fission products for 500 years and they're less radioactive than the ore they came from.  The neptunium, plutonium, etc. isn't waste, it's fuel.

Fission products have uses.  Strontium-90 makes a good heat source; cesium-137 is a decent and trouble-free gamma-emitter for radiotherapy, killing pathogens in food and medical products, and a heap of other things.


Where are you doing to store that waste.

Put some of it in pins or plates in the outflow line for the sewage treatment plant, to kill any bacteria and viruses that the other systems missed.  That way if you get someone in town with e.g. cholera or some other disease that spreads through feces the bugs won't get through the plant into the water supply and cause an epidemic.


The only way out is to reduce consumption and limit transport of goods or means of transportation which will most likely never happen...

You need to read genres other than doom p*rn.

Two attempts to post a rebuttal to Theedude have gone into the bit bucket.  Not funny any more.

Cleaning up (used fuel) from our sole closed CANDU NPP will cost $1,850,000 over 10+ years according to Quebec Hydro's gross under-estimates and over $10.5B according to third party estimates.