The ADEPT project is led by Ricardo in a research partnership including the Advanced Lead Acid Battery Consortium (ALABC); Controlled Power Technologies (CPT); Faurecia Emissions Control Technologies UK Ltd; Ford Motor Company and the University of Nottingham. The final results will be presented at the UK’s LCV2016 event on 14-15 September. 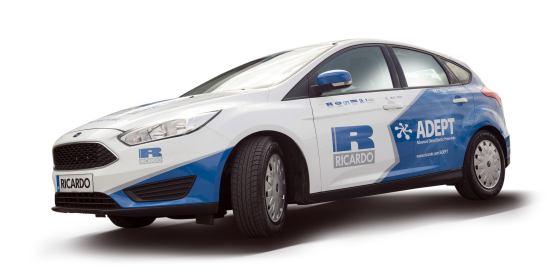 In addition, the integration of hybrid and emissions control systems has the potential to deliver up to a 10-12% reduction in fuel consumption, equivalent to sub-80g/km of CO2 emissions (NEDC). The technology can be delivered at lower costs than a more traditional approach of optimizing each system separately.

Initial analysis shows that costs (based on Ricardo’s estimation) of less than €80 (US$89) per gram of CO2 reduction for every kilometer traveled is feasible through ADEPT technology. Ricardo believes the above package is very competitive with other fuel economy solutions such as full hybridization.

The concept of “intelligent electrification” enables highly aggressive engine downsizing and down-speeding beyond what might normally be possible other than through more expensive hybridization approaches. This is achieved through the use of torque assist from electrically harvested energy, temporarily stored in a 48V advanced lead-carbon battery with a high rate partial state-of-charge capability similar to a supercapacitor, in combination with 48V electrified ancillaries.

With sophisticated electronic control of the powertrain systems, torque assist can be used to ensure that performance is maintained—or improved upon— throughout the duty cycle while also reducing fuel consumption. By basing the system on 48V electrical architecture, the ADEPT project aims to achieve a highly optimal cost and performance trade-off, including ultra-low emissions, while also delivering significant fuel savings.

ADEPT powertrain architecture. The baseline vehicle for the ADEPT research and development programme is based on an already downsized and competitively fuel-efficient diesel Ford Focus ECOnetic 1.5TDCi, homologated with carbon dioxide emissions of 88g/km.

Key features of the vehicle systems include CPT’s water-cooled SpeedStart switched reluctance belt starter generator (BSG), capable of delivering in excess of 12kW of regenerative braking, as well as near instantaneous and near continuous torque assist levels of over 7kW— sufficient to enable significant engine down-speeding in addition to a highly capable start-stop functionality.

The ADEPT powertrain includes a range of electrical ancillaries powered from the 48V system rather than directly from the engine, including for example, the vehicle air conditioning compressor. In addition to powering these ancillaries and facilitating a significantly improved start-stop functionality, ADEPT’s 48V architecture also provides significant levels of torque assist from the BSG to offset fuelling to the engine for improved fuel economy, and to increase overall powertrain torque capability for enhanced vehicle performance.

The control strategies deployed have been developed based on extensive vehicle systems simulation work. This has enabled the core powertrain and aftertreatment system, as well as the 48V BSG, ancillaries, battery pack and exhaust energy recovery system, to be operated in a seamless manner, while also providing a valuable computer-aided engineering (CAE) capability to explore further potential avenues of development and optimization opened up through intelligent 48V electrification.

Development completed, testing ongoing. Following the announcement of the ADEPT project in September 2013, initial integration and development tests were carried out by the ADEPT team on an early functional integration prototype, which was revealed at the LCV2014 show. This enabled the project to carry out de-risking of components and systems, and also provided a platform for evaluating control concepts.

The final ADEPT demonstrator vehicle, which has now been completed, provides the fullest implementation of systems to be carried out by the team. At the LCV2016 show, the final results of ongoing vehicle road and laboratory tests will be revealed for the first time. The project partners also intend to make the vehicle available for ride and drive demonstrations at LCV2016.

The ADEPT research project is jointly funded by the UK Government’s Office for Low Emission Vehicles (OLEV) implemented through the UK innovation agency, Innovate UK, with matching contributions from the participating partners.

I'd see this sort of work as very useful for the ~75% of vehicles which will not be electric or FCEV for the foreseeable future.

Option for a down conversion for used cars seeking a engine swap. Put in longer lithium kWh storage for possible BEV mode in neighborhood driving, would really help cities. Bolt on in-wheel motors would be the best for aftermarket. The states need a subsidy for bev conversions.

I do not think conversions are a runner, you'll have to buy from new. These things touch too much of the car internals.

However, as a new build, I think it makes sense, especially if they can put it into many vehicles at low cost. e80/gm reduction is OK, but not brilliant, e50 would be more like it.

It is also a pity they cannot make a 60V version, but I understand the limit of 48V is for safety reasons - shame.

The trick is to use electricity to do start/stop and acceleration to some modest speeds, then kick in the engine as needed to recharge the battery and power longer distances.

The Chevy Malibu is using the latest VOLT powertrain, where there is no actual transmission; the two electric motors do all the grunt work, then the computer powers on the engine as needed. The new Malibu hybrid already gets almost 40+ miles/gal city and hwy - with no plug in.

So I think the technology here is a bit dated already.

I checked the prices of current Focus 1.5 TDCi with Powershift gearbox and came to a conclusion that there is just no way that this car with aditional "low" cost 48 V system is going to compete against Toyota Auris HSD, just no way. Not to mention that Toyota emits 79g CO2.

48V system may be an option with cheap petrol engine and manual transmission, for those that can't afford full 20k € price tag, but when you are adding option, not to mention complexity, Toyota has way better recipe.

Juan: If the technology were "dated" why has it been so long to get to market? I work in this field and I can assure you the issue has been and continues to be cost, cost, cost. We are just now to the point in power electronics and Pb-based batteries to get this stuff on the street affordably. The idea is to give smooth start/stop, enough torque supplementation and /or forced aspiration boost to shrink the engine even more, capture some recuperative energy, and do all of it at minimum weight and lowest cost. The breakthroughs are all in industrialization. It's finally here.

Gasper: yes, this doesn't achieve what a Prius C (or Auris equivalent model) can do. But it makes substantial improvement with far less cost and weight. The 48v electrification is roughly an 80/20 solution: 80% of the improvement for 20% of the added cost and weight of the strong hybrid. If you bring this to 75% of the non-PHEV LDVs, you would reduce fuel consumption with significant impact, and much sooner than the "perfect" answer, whatever that is.

I am not sure why you would persist with a lead acid battery. A LiFePO4 battery would be a better option given this only requires a small capacity.
Still nothing but a means to extend fossil fuel extraction unless the ICE runs on renewable liquid fuel!

Herman:
- Prius C is not Auris equivalent, Auris is the same size as Focus, there is also estate version, just like Focus. Auris also has the same 1.8 powertrain as Prius, where Prius C and Yaris Hybrid in EU has 1.5 hybrid system and costs just above 15k € (rival would be Fiesta).
- Current Ford Focus 1.5 TDCi Poweshift without 48V system costs just 1k € less than Auris hybrid. Are you suggesting that complete 48V system will cost less than 1k €? Bullshit.
- Weight is offset by heavier diesel engine and Powershift transmission, will 48V system weight less than 50 kg? On Pb battery? Don't make me laugh

The only argument could be that Focus 1.5 TDCi Powershift 48V is better to drive (I doubt that). Problem is that mechanical complexity with 48V system is staying the same, where Toyota is mechanically heavily simplified. For someone who "works in the field" you should really keep your eyes more open on the competition.

Maybe this is to test the technology, if Ford is developing a 1.0 liter diesel based on ecoboost 1.0L (as did Fiat with the 1.2 L diesel from Fire 1.2 L 16v) it could save enough, and using a simple pack of batteries (instead of the costier ones of full-hybrid) would save also in terms of maintenance cost for customer.