The scope of the TS covers the processes from hydrogen production and delivery to compression, storage and fueling of a hydrogen vehicle. It is essentially a safety and performance guideline for hydrogen stations, including the interface to fuel vehicles. The level of safety specified in the TS is similar to the level of safety of stations fueling with conventional fuels.

The TS is the first step towards standardizing hydrogen filling stations. It supersedes the earlier ISO/TS 20100:2008 and is part of a series of standards for the components necessary for a fueling station as shown in the diagram below. 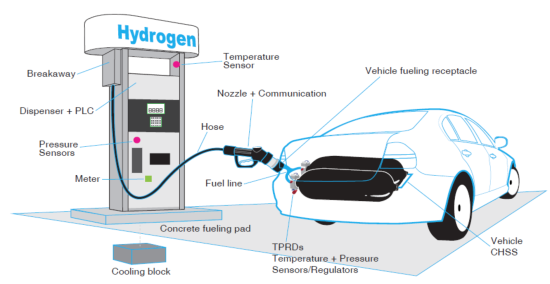 WG 24 is already working on the next step—the development of an International Standard (IS) to be published in 2017. The IS will be especially important for the adoption into the EU Alternative Fuels Directive for hydrogen stations in Europe. There are plans to build several hundred stations in Europe by 2020.

ISO/TS 19880-1 is a milestone technical specification that provides general safety and performance guidance for the hydrogen station, as well as specific recommendations regarding for fueling a fuel cell electric vehicle (FCEV). It also provides a means for validation of hydrogen quality at the station. Thus, it is an important basis for the implementation of hydrogen infrastructure for FCEVs worldwide.

This standard is a breakthrough to allow hydrogen to co-exist with other fuels safely. Oil will be around for many years to come, but we must start to think of alternatives to reduce greenhouse gases.

As with e-charging stations, standardized H2 stations and H2 high pressure tanks are a must for future FCEVs.

Secondly, the cost to mass produce and install standardized H2 stations will less.