In partnership with Lockheed Martin, Neos Inc. will develop a new generation sensor to be used to find oil, gas and minerals beneath the earth’s surface from the air. The new Full Tensor Gradiometry (FTG) Plus technology has 20 times the sensitivity and 10 times greater bandwidth than current gravity gradiometers, according to Neos.

Gravity gradiometers have been commercially used for more than 20 years and militarily longer than that. The technology is based on the principle that earth’s gravity field varies with location, local topography and sub-surface geologic features. Measuring the gravity variation caused by items beneath the earth’s surface can help identify unique underground and undersea geologic structures. The new airborne FTG Plus sensor is so advanced it could find a 10-meter tall hill buried one kilometer below the earth’s surface.

Put another way, the technology could find an armored truck full of gold 20 meters below the earth, purely by sensing the effect the bullion imparts on the local gravity field.

FTG Plus transforms what we can do and what we can see from the air. Remote sensing is going to dominate the exploration market and with this sensor Neos will have the most advanced in the world. It will enable us to image resources cleaner, quicker and at a lower cost to our customers.

Full tensor gradiometers measure the rate of change of the gravity vector in all three perpendicular directions; this facilitates interpretation of sub-surface features with a lateral density contrasting to their surrounds.

Neos acquired the FTG Plus program as part of its acquisition of assets from CGG SA announced in April 2016. Among CGG’s offerings was the Falcon airborne gravity gradiometer (AGG), introduced in 1999. CGG then introduced the Falcon Plus AGG in 2015, halving the footprint, reducing the weight by 40%, and reducing instrument noise by ~50%.

Falcon Plus provided 20 times better spatial resolution (150m vs. 3000m) and up to 10 times higher accuracy (0.1 mGal vs. 1.0 mGal) than conventional airborne gravity at the time. 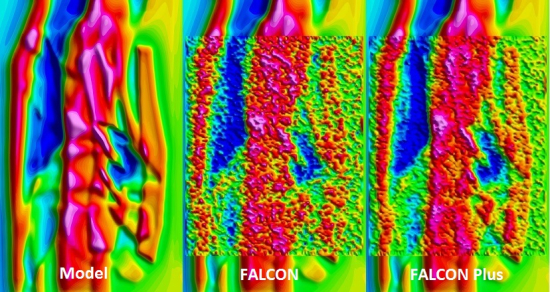 The advances we will make here are extraordinary. One of the reasons is that in the past we and competitors have used military hardware, modified for geophysical survey purposes. FTG Plus is the first time Lockheed Martin has specifically built a sensor for our precise use and needs. That is a fundamental change; it is an entirely new design for us and we have exclusive rights to use it.

Neos has exclusive use of the technology for applications related to oil, gas and mining and will use FTG Plus in its fleet—either Twin-Engined Basler BT-67s, single turbine engine Cessna C-208B Caravan aircraft or Reims-Cessna F406 twin turbine airplanes. The sensors can also be used in helicopters.

The technology has the potential to change the way governments, energy ministries and exploration teams find valuable resources, and ultimately lead to faster, more informed decisions about where to explore, lease and drill.

At a time when so much marine seismic equipment is being cold-stacked, we will be able to use non-seismic technology with a new sensor 20 times better than anything we have ever seen before. This means we will find more resources, quicker and with more accuracy than ever before. It will be transformative.

On April 29, 2016, Neos announced an agreement with CGG SA to acquire its Multi-Physics business group, its General Geophysics Italy group and its data libraries for an undisclosed sum. The FTG Plus program was acquired as part of the transaction, as were a fleet of aircraft used in non-seismic work including those that will fly the FTG sensor.