Catalytic pyrolysis company Anellotech, which focuses on producing cost-competitive BTX (benzene, toluene and xylene) from non-food biomass, revealed Toyota Tsusho Corporation as a multinational strategic equity investor and corporate partner in the renewable aromatic chemicals supply chain. The renewable aromatic chemical can be used use in making plastics such as polyester, nylon, polycarbonate, polystyrene, or for renewable transportation fuels.

Toyota Tsusho is a member of the Toyota Group and is one of the major value chain partners (along with Suntory) in the Anellotech alliance, further validating the global market opportunity for Anellotech’s Bio-TCat technology.

Dried and ground biomass is rapidly heated, and the resulting gases are immediately converted into hydrocarbons by a proprietary, reusable, sand-like zeolite catalyst. The resulting mixture of benzene, toluene and xylenes (bio-BTX)—identical to petroleum-derived counterparts—can be further purified and separated by using well-known commercial technologies at either grass-roots or existing petrochemical infrastructures. 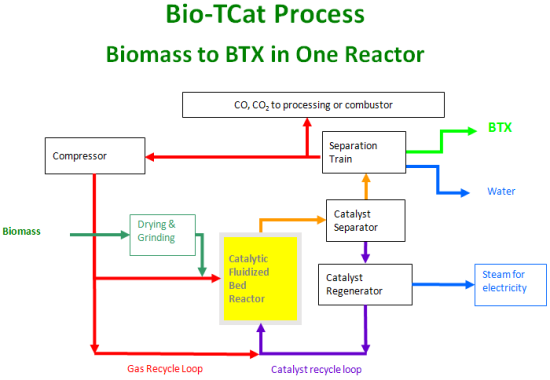 By going directly from biomass to BTX in one step, Anellotech does not make the highly oxygenated bio-oil intermediate products that are often the result of multi-step pyrolysis processes, and so avoids the need to add significant amounts of costly hydrogen.

This 25 meter-tall unit’s purpose is to confirm the viability and suitability of the Bio-TCat process for scale-up, and generate the data needed to design commercial plants using Bio-TCat technology.

The TCat-8 unit was jointly designed by Anellotech and its R&D partner IFPEN, and will use a novel catalyst under joint development by Anellotech and Johnson Matthey. After verification of the continuous operation of TCat-8, Anellotech Alliance partner Suntory plans to move ahead with studies to consider the development of the first commercial-scale Bio-TCat plant.

The TCat-8 unit has been installed at host South Hampton Resources’ Silsbee, Texas location. Remaining construction activities required to bring the unit online are scheduled to be completed shortly, followed by commissioning and startup of this first-of-its-kind development and testing facility later this year. Toyota Tsusho management recently visited the TCat-8 unit at Silsbee, and, noting the advanced stage of development, elected to make public their involvement in the program.

Toyota Tsusho’s interest in Anellotech’s technology is aligned with its goal of promoting sustainable bio-materials, including bio-based polyester (polyethylene terephthalate, or PET). Bio-sourced, drop-in BTX made from the Bio-TCat process is also useful in the manufacture of other derivative plastics including polyurethane, polycarbonate, polystyrene and nylon.

Toyota Tsusho Corporation is the Toyota Group’s general trading company that develops diversified businesses through more than 990 consolidated companies in Japan and overseas and with customers around the world, via a global network covering Japan and more than 90 countries worldwide.