Nissan Motor’s new Serena, scheduled to go on sale in Japan in late August, will come equipped with the company’s ProPILOT autonomous drive technology. ProPILOT is designed for highway use in single-lane traffic. Nissan is the first Japanese automaker to introduce a combination of steering, accelerator and braking that can be operated in full automatic mode, easing driver workload in heavy highway traffic and long commutes. 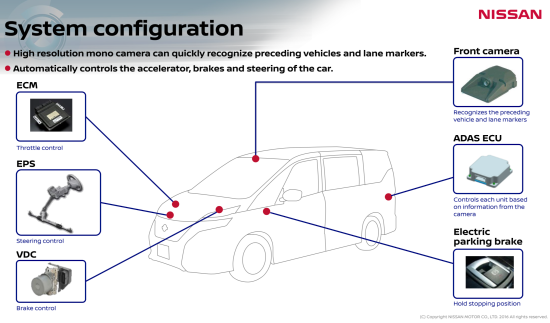 Nissan says that ProPILOT technology is extremely user-friendly, due to a switch on the steering wheel that allows the driver to easily activate and deactivate the system. ProPILOT’s interface includes a personal display showing the operating status.

The accelerator, brakes and steering are controlled based on information obtained through a mono camera equipped with advanced-image processing software. Nissan incorporated its own image analysis technology with Mobileye’s technology into ProPILOT. The technology instantly detects the three-dimensional position of the preceding vehicle and lane markers and accurately controls the steering.

Once activated, ProPILOT automatically controls the distance between the vehicle and the preceding vehicle, using a speed preset by the driver between approximately 30 km/h and 100 km/h (18.6 and 62 mph). The system also keeps the car in the middle of the highway lane by reading lane markers and controlling steering, even through curves. (When there is no preceding vehicle, the system cannot be used at speeds lower than 50 km/h / 31 mph.)

Detecting the steering angle with high resolution capability allows for more precise handling. For example, the system is less affected by uneven roads or by cant.

If a car in front stops, the ProPILOT system automatically applies the brakes to bring the vehicle to a full stop. After coming to a full stop, the vehicle will remain in place even if the driver’s foot is off the brake pedal. When ready to resume driving, ProPILOT is activated when the driver touches the switch again or lightly presses the accelerator. 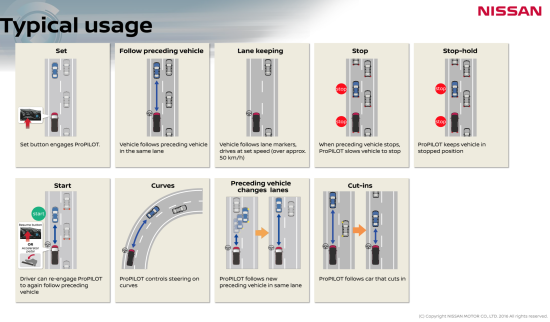 Nissan is proactively working on vehicle intelligence and vehicle electrification to make its corporate visions of “Zero Emissions” and “Zero Fatalities” a reality. Under “Nissan Intelligent Mobility”, ProPILOT is part of “Nissan Intelligent Driving”.

ProPILOT will be introduced into other vehicles, including the Qashqai in Europe in 2017. There are also plans for the technology to be introduced in the US and China markets. A multi-lane autonomous driving technology will enable automatic lane changes on highways and is planned for introduction in 2018 while autonomous driving on urban roads and in intersections is planned for launch in 2020. 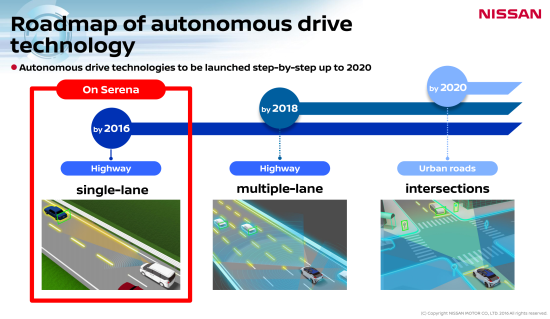 Nissan said it will introduce autonomous drive technology in each market’s core models.

The new Serena. The new Serena is the fifth generation of the family vehicle, which was first introduced to the Japan market in 1991. More than 1.5 million Serenas have been sold since it first went on sale. 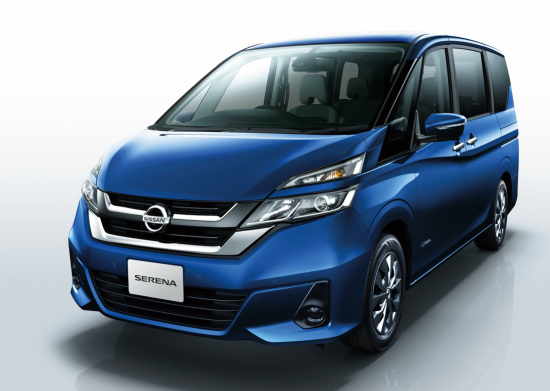 In addition to ProPILOT, the all-new Serena is equipped with the latest in safety technology. These include Nissan’s emergency braking system, Lane Departure Warning, Around View Monitor and Smart Rearview Mirror. The new Serena will also feature Intelligent Park Assist, the easy-to-use automatic parking system that was first equipped on the X-TRAIL, with improved accuracy.

The all-new Serena continues with the popular S-Hybrid of the current model; however, detailed improvements to the engine have resulted in better fuel economy. These upgrades have been realized with no sacrifices in interior space.

Note that it is a single camera application, which I am none too keen on, as glare can blind them when there is no alternate camera to switch to, and distance is far more difficult to determine from just one.

Also of interest according to the link is that you have to keep your hands on the steering wheel at all times, or the car moans like heck.

I think this level of automation is still a standing encouragement to inattention, as soon as the need to steer the car is taken away, but at any rate may be somewhat less lethal than Tesla's irresponsible implementation.

Nissan is making an advanced autopilot (AP) for a car that sells for only 3 million yen or 28k USD. That is good. It may be a new low price. It cannot do as much as Tesla’s AP but it is a step in the right direction. We need AP systems in all new cars ASAP and they should be required to collect accident statistics and upload it automatically every day to the automaker that in turn also should be responsible for publishing the anonymous raw data every month on their webpage. Tesla and Google are the only auto –makers/testers that have such a system that collects data on a daily basis. If this becomes law I for my part would like to access and analyse these data free of charge and blog about it. It would be a grate way to check that these systems and the automakers are making cars that actually reduces the change of accidents. Unsafe cars are one of the biggest problems in the world as 1.3 million people are killed every year in car accidents. AP systems could reduce that enormously.

They are going at it rather slowly, IMO.
They do not have stereo ranging or radar or Lidar ranging which I would see as a big problem.
They may have "advanced algorithms" to measure the range to the car in front, but a direct measurement from one of the above is always better than fancy algorithms. They should, at the very least add the extra hardware now so they can gather data (even if they can't process it), as Tesla have done.
Also, an AV that requires you to keep the hands on the wheel is just an annoyance, IMO.