In 2013, Boeing and SAA launched their sustainable aviation fuels collaboration and in 2014, Project Solaris became the first focus project that converted oil from the Solaris plant seed into bio-jet fuel. 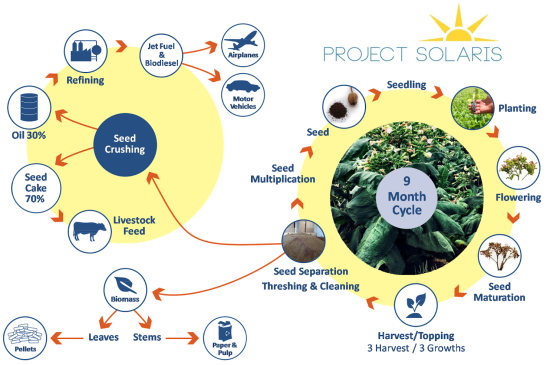 In 2015, farms in Limpopo Province of South Africa, from which the biofuel for the flights was sourced, achieved certification from the Roundtable on Sustainable Biomaterials (RSB), one of the strongest sustainability standards in the world. RSB certification provides a model for expansion of Project Solaris to larger scale production.

The initiative also focuses on South Africa’s goals for public health, rural development and economic and employment opportunities for farmers by increasing production of Solaris and other feedstocks on under-utilized land.

The partners today also launched a stakeholder and sustainability plan called the Southern Africa Sustainable Fuel Initiative (SASFI) to ensure a long-term domestic fuel supply for SAA and other regional fuel users. The goal is to scale-up over the next several years to gain additional biofuel capacity. If successful, farmers will be able to tap into local and global demand for certified feedstock without adverse impact to food supplies, fresh water or land use.

Studies have shown that sustainably produced aviation biofuel emits 50-80% lower carbon emissions through its life cycle that fossil jet fuel. Airlines around the world have conducted more than 2,500 passenger flights using various forms of aviation biofuel since it was approved for commercial use in 2011.

Sunchem and Solaris. Italy-based Sunchem Holding is an industrial research and develop company operating in the sector of genetic and recombinant DNA applied to plant for energy purposes. Sunchem holds the exclusive rights for an international industrial patent named “Solaris Seed Tobacco”.

Solaris is a traditionally cross-bred variety of tobacco that contains no nicotine, has excessive seed and limited leaf production compared to traditional tobacco. It grows under different climate and soil conditions; is cultivated in roughly the same way as traditional tobacco; and is exceptionally suited as rotation crop with cotton.

Although an annual crop, it can be harvested at least three times a year. The seeds contain 33% oil and 67% press cake (fit for animal feed), on top of that the harvest yields significant amounts of green biomass. All agronomic inputs needed, such as, fertilizer, water, crop protection etc. are similar to traditional tobacco farming.