BMW has introduced its three 7 Series plug-in hybrid luxury sedans: the 740e iPerformance, 740Le iPerformance, and the 740Le xDrive iPerformance. (Earlier post.) The trio source their power from a latest-generation four-cylinder gasoline engine with BMW TwinPower Turbo technology and an electric motor. Together, they deliver a system output of 240 kW/326 hp.

The combined electric power consumption of the BMW 740Le xDrive iPerformance in the EU test cycle comes in at between 13.9 and 13.2 kWh per 100 kilometers.

The combustion engine with BMW TwinPower Turbo technology employed by the plug-in hybrid variants of the new BMW 7 Series is a member of the new Efficient Dynamics engine family. Developing maximum output of 190 kW/258 hp, it is the most powerful four-cylinder engine ever fitted in a series-produced BMW.

The electric drive system, based on the principle of a permanently excited synchronous motor, delivers a high power density with a maximum output of 83 kW/113 hp. As is characteristic for electric drive systems, it serves up its peak torque of 250 N·m (184 lb-ft) instantly. The electric motor also takes on the role of a generator which—depending on the hybrid function selected—is powered either by recuperating braking energy or by efficiently raising the engine’s load points. It then feeds the energy it generates into the high-voltage battery.

The electric motor is fully integrated into the eight-speed Steptronic transmission. This ensures that pure-electric driving, the dynamics-enhancing electric boost function and the recuperation of braking energy are all efficient.

The eight-speed Steptronic transmission has outstanding internal efficiency, top-class shift dynamics and shift comfort, and a compact construction. Gearshift paddles on the steering wheel are available as an option, enabling the driver to make manual gear selections with exceptional swiftness and the greatest of ease.

Working together intelligently, the combustion engine and electric drive system deliver a system output of 240 kW/326 hp and a combined peak torque of 500 N·m (369 lb-ft). The BMW 740e iPerformance accelerates from 0 to 100 km/h (62 mph) in 5.4 seconds; the BMW 740Le iPerformance to completes the same sprint in 5.5 seconds. 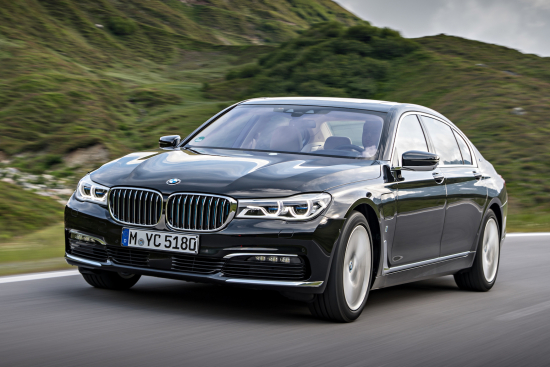 The BMW 740Le xDrive iPerformance is the brand’s second model to distribute its power permanently to all four wheels in pure-electric driving, when the combustion engine cuts in and when both drive systems are in use at the same time.

Power distribution between the front and rear wheels gives the BMW 740Le xDrive iPerformance extremely dynamic accelerative ability, with the journey from rest to 100 km/h completed in 5.3 seconds.

The driver can use the eDrive button on the center console to change how the plug-in hybrid drive system operates.

The plug-in hybrid variants of the new BMW 7 Series are also equipped as standard with the newly designed Driving Experience Control switch on the center console. The driver can activate a vehicle setting that optimizes dynamics, comfort or efficiency. The range of characters encompassed by ECO PRO, COMFORT and SPORT modes are even more clearly defined than with conventionally powered vehicles.

Beyond this, the Driving Experience Control switch offers the option of selecting ADAPTIVE mode. In this setting, the car’s responses adapt noticeably to the driver’s style and route profile.

The high-voltage lithium-ion battery has a gross capacity of 9.2 kWh and net capacity of 7.4 kWh. It is accommodated underneath the rear seat bench in a space-saving position that also provides optimum crash safety. The BMW iPerformance variants of the new BMW 7 Series therefore also benefit from a level surface in the luggage compartment, which offers a capacity of 420 liters.

The high-voltage battery can be topped up with energy from any domestic power socket, a Wallbox designed for higher currents or public charging stations. The battery can be fully charged in under four hours from a domestic power socket and in under three hours from a BMW i Wallbox. Added to which, BMW 360° ELECTRIC includes the ChargeNow service, which grants straightforward access to partner charging stations and can also be used for the convenient billing of monthly energy costs.

The high level of standard specification for the BMW 740e iPerformance, BMW 740Le iPerformance and BMW 740Le xDrive iPerformance includes LED headlights, the BMW Display Key, the ConnectedDrive navigation package, smartphone integration with inductive charging facility for the phone battery, and an iDrive operating system expanded to include a touchscreen function for the Control Display and the globally unique BMW gesture control feature.

The charger connection for the high-voltage battery can be found under the flap in the left-hand front side panel. The high-set position of the connection makes the charging process easier. Standard equipment includes a charging cable for use with a domestic power socket, which can be stored in a bag in the trunk area to save space.

Inside the BMW 740e iPerformance, BMW 740Le iPerformance and BMW 740Le xDrive iPerformance, the most prominent hybrid-specific features include-in addition to the eDrive button-special graphic displays in the instrument cluster and Control Display. On the outside, the transfer of technology from BMW i is flagged up by “eDrive” badges on the C-pillars, the BMW i logo on the front side panels (left and right), BMW kidney grille bars in BMW i Blue and blue hub covers.

The BMW Group uses the knowledge gained in the development of BMW i cars for the production of its own electric motors and high-voltage batteries. BMW eDrive technology is also employed in the BMW iPerformance models.

Wonder went the first BMW FC-PHEV will be available?

They need a new way of testing PHEVs in Europe. What they have is fine for around town, but if you try to drive from Hamburg to Frankfurt, it spends most of this as an ICE.
(Still, better to have a 7 series powered by a 2.0L 4 cylinder than a 3.0L 6 cylinder [CO2 wise]).

It would also be nice to see the drivetrain in a 5 and 3 series, where people might be able to afford them.