The Mercedes-Benz Future Bus with CityPilot, which Daimler will showcase at the upcoming IAA 2016 in Hannover in September, is already making its first public journey on part of Europe’s longest BRT (Bus Rapid Transit) route in the Netherlands, linking Amsterdam’s Schiphol airport with the town of Haarlem. 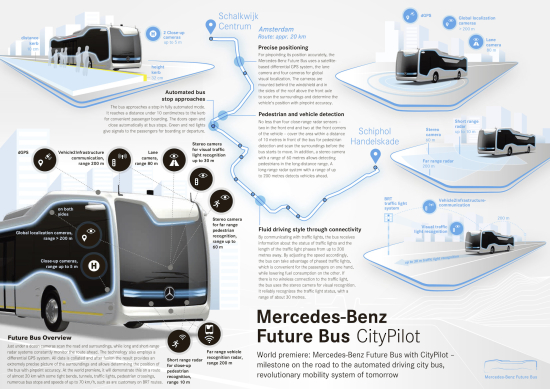 The almost 20 km route is challenging for the semi-autonomous bus, as it has numerous bends and passes through tunnels and across junctions with traffic lights.

The CityPilot technology undergone substantial further development specifically for use in a city bus, with numerous added functions. Using vehicle-to-infrastructure (V2I) communications, the CityPilot is able to recognize traffic lights, communicate with them and safely negotiate junctions controlled by them.

The V2I function uses a WLAN to a distance of around 300 m. The traffic light tells the bus what color it is showing, while the bus reports its approach and adjusts its speed to the predictable color change. It can initiate a priority change to ensure a “green light” along the route.

It is not always automatically given priority, however, because if another bus has just passed through or cross-traffic has just been given the "green" light, an immediate change would lead to a traffic jam. So the bus and the traffic light flexibly adapt their actions thanks to their communication, allowing the best possible traffic flow.

CityPilot can also recognize obstacles, especially pedestrians on the road, and brake autonomously.

The bus, with a top speed of 70 km/h (43.5 mph) on the open road, approaches bus stops automatically, where it opens and closes its doors. It is also able to drive through tunnels.

Throughout the journey the driver does not need to operate the accelerator or brake at all, and only needs to take the wheel in accordance with traffic regulations when there is oncoming traffic. However, the driver is able to intervene at any time and immediately take control if required.

Ten cameras in different systems with a wide range of purposes coupled with long and short-range radar systems provide a stream of data that, through data fusion, create an extremely precise picture and allow the bus to be positioned to within centimeters. The Amsterdam demonstration is showing that the system works in practice.

Drive units. The Mercedes-Benz OM 936 in-line six-cylinder engine is installed on the left in the rear. It develops 220 kW (299 hp), meets the Euro VI emission standard and transfers its power to the driven low-floor portal axle via an automatic torque converter transmission. The new Mercedes-Benz M 936 G gas engine is also an option.

Mercedes-Benz has also announced a battery-electric drive system for city buses for 2018.

Reduce the size and increase frequency, and we have a winning strategy for public transportaion.