Lux: biojet fuel to account for 56% of targeted 2050 CO2 emissions reductions in aviation

Biojet fuels will be key to achieving the aviation industry’s pledge to cut CO2 emissions to 0.2 billion tons (GT) in 2050—half the 2005 figure—as opposed to the staggering 2.1 GT projected by current growth rates, according to a new report from Lux Research, “Biojet Fuel Technology Roadmap.”

Lux forecasts that biojet fuel innovations, led globally by Honeywell UOP and Boeing, will account for 56% of the targeted CO2 emissions reductions, while a third of the requisite cuts will come from new aircraft technology, and optimization of operations and infrastructure.

With lessons learned from the mishaps of road transportation and regulatory policies emerging from a single governing body, ICAO, the aviation industry is well-positioned to meet emissions targets. In the estimated $300-billion jet fuel market in 2050, Neste and Honeywell UOP will be winners over the short term, while renewable diesel producers UPM and Renewable Energy Group will be mid-term winners, and companies like Ensyn and Licella will be long-term winners. 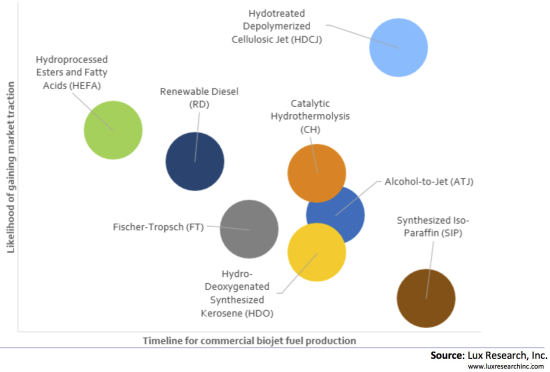 Lux Research analysts studied the biojet fuel landscape against 2050 targets for CO2 emissions, and evaluated the main companies involved in the development of novel fuel types. Among their findings: