Chevrolet introduced the all-new Cruze (earlier post) in China. Cruze is the brand’s best-selling model both globally and in China, with more than 4 million sold since the first-generation model’s launch seven years ago. 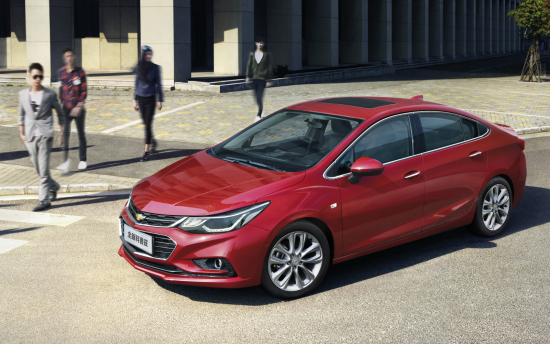 Customers have a choice of a 1.4L direct injection turbocharged engine or a 1.5L direct injection engine. The new global small-displacement engines offer combined fuel consumption as low as 5.7 liters/100 km (41 mpg US) with the introduction of fuel-saving technologies such as the standard stop/start.

The 1.4L turbocharged engine generates maximum output of 110 kW and peak torque of 240 N·m. It is paired with a finely tuned intelligent seven-speed DCG transmission that provides smooth and precise gear shifting.

The 1.5L direct injection engine generates 84 kW of maximum output and 146 N·m of peak torque. Those who prefer this engine can select a new intelligent six-speed DSS transmission or a six-speed manual transmission.

The all-new Cruze rides on a sports chassis that was tuned at the Nürburgring and comes with the GM-patented reinforced Watt linkage. The lightweight design and increased use of ultra-strength materials have resulted in a weight loss of 120 kg without impacting stiffness.

Chevrolet announced the sedan is available in seven different trim levels, with a price range between RMB 109,900 and RMB 169,900.

With the launch of the all-new Cruze and introduction of the Malibu XL earlier this year, Chevrolet has entered a new phase of growth in China. It plans to launch five new or upgraded models in the second half of 2016, including an SUV and performance vehicle in North America and China simultaneously, giving Chevrolet a competitive full product lineup.