Daimler Trucks has unveiled the Mercedes-Benz Urban eTruck, an all-electric, short-radius distribution heavy-duty truck, based on a three-axle truck from Mercedes-Benz. The entire conventional drivetrain has been replaced by an electrically driven rear axle with electric motors directly adjacent to the wheel hubs. Their maximum output is 2 x 125 kW, while the peak torque is 2 x 500 N·m. In combination with the gearing, the torque at the wheel reaches 11,000 N·m.

The power is supplied by a battery pack consisting of three modules of lithium-ion batteries with a total capacity of 212 kWh. This results in a range of up to 200 km (124 miles)—normally enough for a typical day's delivery round. Depending on the desired range, the modular battery pack can be customized by adding or removing batteries. The Urban eTruck is connected to the charging station using the Europe-wide standardized Combined Charging System (CCS) Type 2 connector. With a charging power of 100 kW, the fully discharged batteries are charged to 100% in two to three hours. (The system will support up to 150 kW.) 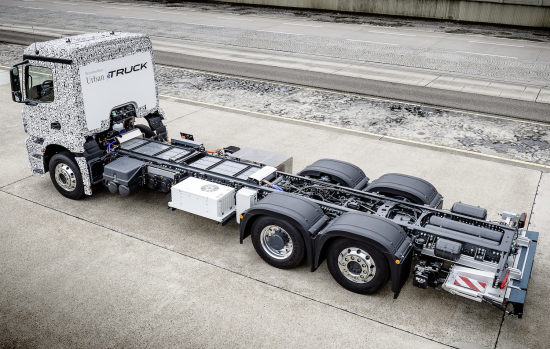 The axle is based on the ZF AVE 130 and has already proved its worth in its basic version as a low-floor portal axle in hybrid and fuel-cell buses from Mercedes-Benz.

However, the axle has been comprehensively modified for use in the Urban eTruck. There is a new axle housing, which is significantly raised to give a ground clearance of more than 200 mm. The method of axle attachment has been reconfigured on account of the frame-type construction typical of a truck. 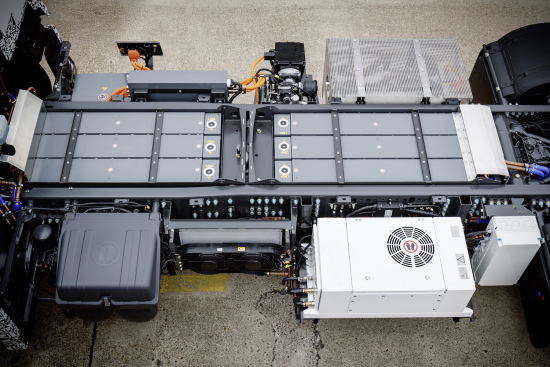 Another characteristic of the axle used in this particular application is its super single tires sized 495/45 R 22.5. These are used because of the frame width of the chassis in combination with the positioning of the electric drive motors adjacent to the wheel hubs. Also, super singles are considerably less heavy than conventional twin tires, making for a higher payload. The maximum permissible axle load of the drive axle is 11.5 tonnes, which is at the usual level.

For the Urban eTruck, the original low-floor axle has been provided with a liquid-cooled high-speed asynchronous three-phase motor on each side. The rated voltage is 400 V, while the maximum output is 2 x 125 kW. The motors have a peak torque of 2 x 500 N·m. In combination with the gearing, the torque at the wheel reaches 11,000 N·m.

Three-axle rigids with 26 tonnes permissible gross vehicle weight are responsible for deliveries to shopping centers or large supermarkets, particularly in urban and suburban areas. They combine high load capacity with maneuverability. The same concept is reflected in the Urban eTruck, which is based on a three-axle short-radius distribution truck. It is celebrating its premiere in the form of a chassis with cab.

The electrically driven axle weighs around 1000 kg, while the other necessary electrical components add up to a further 900 kg. The heaviest components are the batteries, including mountings, which weigh in at 2500 kg. This is offset by the absence of an engine, transmission, propeller shaft, differential and fuel tank, which together come to around 2700 kg. This means that the Urban eTruck in the described configuration has an extra weight of only about 1700 kg.

The EU Commission is in favor of increasing the permissible gross vehicle weight of trucks with alternative drives by up to one tonne;this will more or less cancel out the weight disadvantage of the electric drive. This will raise the permissible gross vehicle weight of the three-axle rigid truck from 25 to 26 tonnes, which will bring the original extra weight down to 700 kg compared with a directly comparable IC-engined truck.

Fuso Canter E-Cell As far as light-duty trucks are concerned, the all-electric drive is already a reality. This is demonstrated by the Fuso Canter E-Cell. Following a successful fleet trial in Portugal, the Canter E-Cell has now satisfactorily completed around six months of the first fleet trial for trucks of this kind in Germany. (Earlier post.) It will be available in future under the name of Fuso eCanter. There will be news about it at the IAA International Motor Show for Commercial Vehicles, which begins on 21 September 2016. 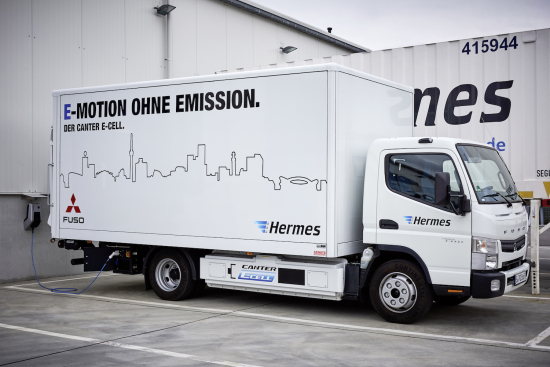 Its battery packs with a total capacity of 48 kWh are mounted on the left and right sides of the frame. The electric motor has an output of 110 kW, while the peak torque is 650 N·m. The range of the Canter E-Cell is over 100 km, depending on how the vehicle is used. In Europe, the batteries are charged with the same, standardized connector used also by the Urban eTruck. The vehicle can be fast-charged to 80% of its total capacity in just one hour.

Alongside Mercedes-Benz and Freightliner, Fuso is the third major brand of Daimler Trucks and a leading manufacturer of “green” light-duty trucks. Fuso Canter Eco Hybrids are in service all around the world. The second generation of the truck has been in production since 2012. The first generation of the all-electric Canter E-Cell was launched by Fuso in 2010, with the second generation following in 2014. In parallel with the current fleet trial in Germany, Fuso is already working on the third generation, which will make the electrically powered Canter even more efficient and suitable for everyday use.

And the BEVolution continues.