Steel production is energy-intensive; in 2015, the steel industry accounted for 1.5% of all industrial shipments in the US but 6.1% of industrial delivered energy consumption. The US Energy Information Administration’s (EIA) Annual Energy Outlook 2016 (AEO2016) Reference case projects that energy use in the steel industry will further increase by 11% over 2015–2040.

EIA attributes much of the projected decrease in energy intensity to the shift in steel production from primary to secondary (recycled) production.

Technology advances in both BOF and EAF crude steel production processes—such as blast furnace gas recovery, pulverized coal injection, and scrap preheating—as well as advances in rolling and casting have continued to lower the energy intensity of the overall manufacturing processes.

For example, direct reduced iron (DRI) (earlier post) is now commercially available and growing, accounting for 8 million tons (9%) of iron production in 2015. Conventional direct reduced iron is produced by the reduction (removal of oxygen) of iron oxide lumps or pellets at 800-1050 °C—below the melting point of iron (1536 °C)—by interaction with reductants (H2+CO) derived from natural gas or coal.

The resulting sponge iron is readily used as feed in the EAF process. The DRI process performs the same function as a blast furnace, in that it converts iron ore to iron, but it does not involve the use of coke (produced by anaerobic baking of metallurgical coal). The DRI process converts iron ore to iron using less energy and with a lower capital cost than the blast furnace process. 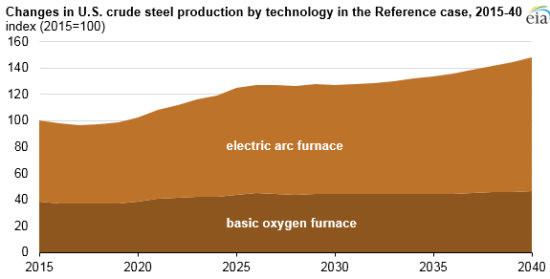 According to calculations based on the Manufacturing Energy Consumption Survey and the World Steel Yearbook, from 1991 to 2010, the share of US steel production using electric arc furnaces increased from 38% to 61%, while the energy intensity of crude steel production decreased by 37%.

Further analysis in AEO2016 includes three alternative cases that model the effects of technology choice on energy intensity in the steel industry. Two alternative cases introduce incentives for demand-side efficiency—Low Incentive and High Incentive—which use an assumed carbon fee to increase the price of energy inputs. Fuel prices are affected based on their carbon intensity.

In the Low Incentive and High Incentive cases, DRI accounts for a larger share of BOF iron input than in the Reference case. DRI is less carbon-intensive than a blast furnace, because DRI uses natural gas to reduce iron, whereas a blast furnace relies on metallurgical coal that has been coked, and the coking process itself is carbon-intensive. Also, DRI is less energy-intensive than BF because the DRI process does not involve melting iron and thus operates at lower temperatures.

The low turnover rate of equipment, which typically lasts for decades, means that it takes years for a large increase in basic oxygen furnace or electric arc furnace capacity to occur.

As a result, the use of energy to produce steel will generally not respond quickly to price or innovations in technology. Although the relative use of basic oxygen furnace and electric arc furnaces is generally similar across cases, the Energy Efficient Technology case includes greater adoption of more efficient post-furnace processing technologies, which further reduces energy intensity. The Low and High Incentive cases initially result in relatively larger declines in energy intensity, but by 2040 the differences between these cases and the Reference case are smaller.